Since communism crumbled in 1990, Albania's Democrats and Socialists have repeatedly thwarted each other's plans to restore Mother Teresa Square to its original glory. 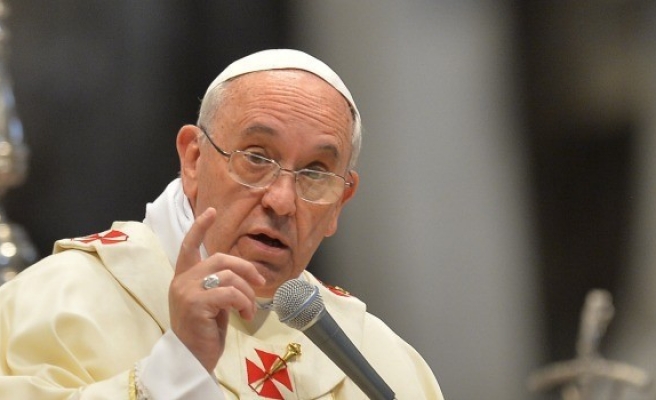 Pope Francis has worked a small miracle in Albania even before his arrival here on Sunday -- spurring bitter political foes to join forces to spruce up the rundown square where he will celebrate Mass.

Since communism crumbled in 1990, Albania's Democrats and Socialists have repeatedly thwarted each other's plans to restore Mother Teresa Square to its original glory.

But with the pope picking Albania for his first official visit to a European country, the Socialist-led government and Democrat-held capital set aside their differences to undertake a multi-million-dollar overhaul of the site.

The dilapidated state of the square has long been a source of anger among Tirana residents. In the past few weeks, however, workers have removed a much-despised and broken central fountain, a fast-food restaurant and improvised shops and cafes.

The facades and columns of the Italian-designed University Building, the Institute of Archaeology and the Arts Academy - blackened by exhaust fumes and dirt - have been sprayed clean and hundreds of broken tiles have been replaced.

"Luckily his visit has given Tirana a facelift; its shine is back," said Dorina Tocaj, a young mother pushing her baby in a pram as workers hurried to complete the final touches.

Raqi, a telephone technician working nearby, told Reuters: "I've been crossing it all my life, so I find it a bit strange and amazing to see that it was actually so much better 70 years ago."

The square, originally designed in 1940 by an Italian architect when Albania was under the occupation of Mussolini's Italy, takes its present name from Mother Teresa of Calcutta, the ethnic Albanian Nobel Peace Prize winner who is one step from sainthood within the Catholic Church.

Albanians -- Catholics, Orthodox Christians and Muslims alike -- are expected to pack the square on Sunday to hear the pope speak during his day-trip across the Adriatic from Italy.

Francis is expected to celebrate the revival of religion in Albania, banned under a Stalinist regime in power for four decades following World War Two, and the peaceful co-existence of faiths in the predominantly Muslim but largely secular Balkan country.

Large pictures of Albanian Catholic clerics who were executed or died in labour camps under dictator Enver Hoxha have been hung along the main boulevard running from the square.

Albania's progress towards the European mainstream over the past two decades has been rocky, plagued by weak governance and political parties often at each other's throats.

In 2006, when Socialist Prime Minister Edi Rama was mayor of Tirana, the government under then Democrat premier Sali Berisha bulldozed a half-built flyover started by Rama. The current government is now resisting the extension of the main boulevard by the Democrat mayor.

Rama won plaudits as mayor for giving parts of the capital a new lick of bright paint, though much is still to be done.

"Inch by inch a corner of the city is being rubbed clean and polished to restore its old glory," analyst Skender Minxhozi wrote in the Albanian daily Shqip. "The rest, the biggest part, which will not be trodden the Holy Father, will continue as before."