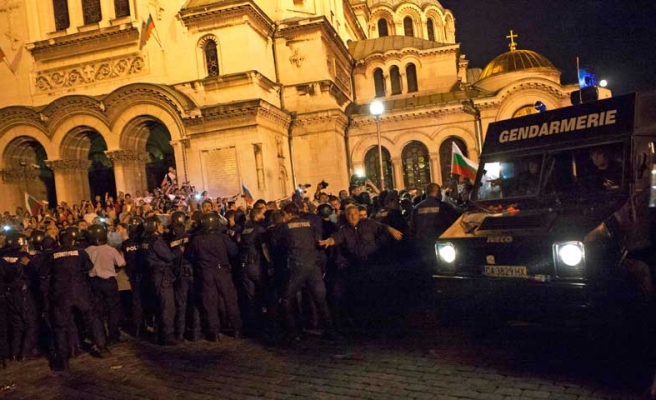 About 200 demonstrators used social network sites in order to organize the activities as opposition protestors did and declared to have collected 327,000 signatures.

Expressing that they had no connection with any political party, but addressing each other as 'Comrade', the protestors carried 28 boxes, filled with signatures, to the building of the Council of Ministers.

The protestors stopped in front of the Presidency and demanded the resignation of President Rosen Plevneliev who supported protests against the government.

Bulgarian PM Plamen Oresharski accepted the representatives of the group collecting the signatures. The Sofia Municipality distributed cold water in glasses to the protestors in front of the Prime Ministry building as most of them were elderly people exposed to excessive-hot temperatures.

Prime Minister Oresharski met with the group who introduced themselves as the 'New Social Agreement Initiative' and stated to have been pleased with the number of signatures collected for his government.

Plamen Oresharski expressed that he did not see any serious criticisms about the priorities of coalition government which was established on March 29. He also mentioned the demonstrations lasting for 47 days against government and parliament, adding "Unfortunately, the society does not argue our cabinet's priorities and activities, but argues minor issues."

Anti-government protestors are preparing to hold a big protest on August 2, when the parliament would decide on holiday. The protestors who are organized via social media are planning to sunbathe wearing swimsuits during 48th protest to be held in front of the parliament.