Demonstrators are calling for 'genuine elections' organised by transitional government in place of PM Djukanovic, who has been at the centre of power since the early 1990s 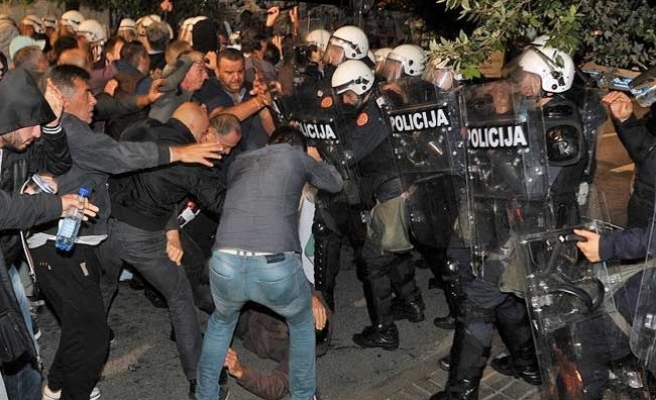 Montenegrin protesters on Sunday hurled stones and used pepper spray against police, who retaliated with tear gas during a rally of several thousand seeking the prime minister's resignation.

Demonstrators in the tiny Balkan nation are calling for "genuine elections" organised by a transitional government in place of Prime Minister Milo Djukanovic, who has been at the centre of power since the early 1990s.

Sunday's outburst took place in front of parliament, when protesters tried to break through a fence in front of police forces, who had sealed off the building.

As they throw stones and flares, one protester was hit in the head and fell to the ground bleeding, said an AFP journalist at the scene.

Police responded with tear gas, releasing it from a nearby street to keep protesters back, while some of the opposition activists eventually calmed down the angry crowd.

"We seek the resignation of the government and formation of an interim one," said Andrija Mandic from the main opposition bloc, the Democratic Front.

If the left-wing government does not resign by Saturday, even bigger protests will be staged, he said.

"This is an ultimatum and it is irrevocable."

"Milo thief!" and "He is over!" chanted the protesters, who eventually dispersed after about an hour. Some of them waved Montenegrin flags and shouted insults at police.

On Saturday morning special police officers had dispersed a few dozen protesters who had been camping out in front of the assembly for almost three weeks seeking Djukanovic's resignation.

A total of 11 people were detained during the dispersal, including two MPs from the Democratic Front, while six officers were slightly injured, police said.

Montenegro's parliament was to discuss the incidents and whether police used excessive force on Tuesday.

Djukanovic, 53, won re-election as premier in 2012 elections, marking the third time he has held the post since independence in 2006, when the country broke up a loose union with neighbouring Serbia. He was also president of Montenegro between 1998 and 2002.

The next parliamentary polls in the country with a population of some 630,000 are due early next year.