Thousands of refugees have broken through the police border after being stranded in no-mans land. 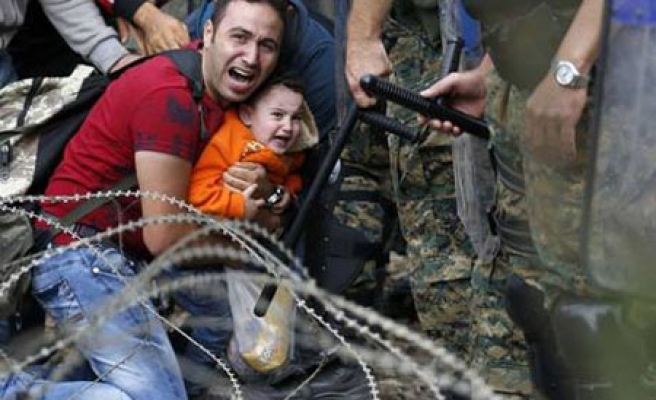 Thousands of rain-soaked migrants stormed across Macedonia's border on Saturday as police lobbed stun grenades and beat them with batons, struggling to enforce a decree to stem their flow through the Balkans to western Europe.

Security forces managed to contain hundreds in no-man's land. But several thousand others - many of them Syrian refugees - tore through muddy fields to Macedonian territory after days spent in the open without access to shelter, food or water.

"In this Europe, animals are sleeping in beds and we sleep in the rain," said 23-year-old Syrian woman Fatima Hamido after running across the border. "I was freezing for four days in the rain, with nothing to eat."

Macedonia on Thursday declared a state of emergency and ordered its borders sealed to migrants, many of them refugees from war who have been entering from Greece at a rate of 2,000 per day en route to Hungary and Europe's borderless Schengen zone.

On Friday, riot police fired tear gas and stun grenades to drive back angry crowds, in the latest flare-up in a migration crisis that has brought ripples from the conflicts of the Middle East to Europe's shores.

Calling out the army, Macedonia said it would ration access, and allowed some 600 through overnight; they squeezed onto a dawn train north to the Serbian border.

But far more have since arrived on the Greek side, converging on a filthy, chaotic strip of frontier with little sign of an organised aid effort. Some industrious Greeks sold sandwiches and drinks to those prepared to pay. A man with a generator charged 1.5 euros to charge mobile phones.

Pakistani man Faroq Awais, 30, said: "Last night it was raining and we couldn't go anywhere inside. We were sleeping against the walls of a building but it didn't help."