The January 9 celebration was slammed as anti-civilizational and a disguise for legitimizing the mass crimes and genocide which they say the entity was founded upon. 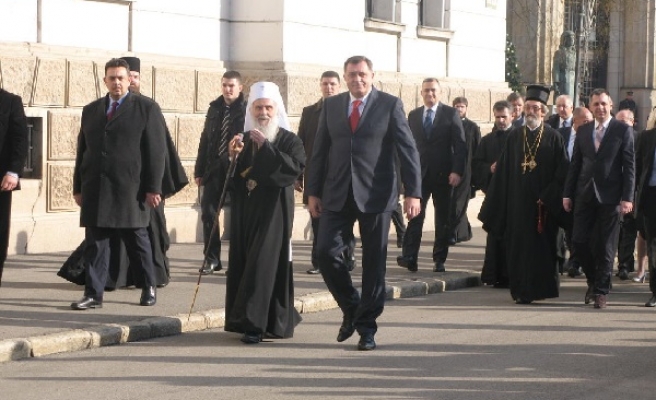 The celebration of January 9 as a Day of Republika Srpska (RS) is a reminder that war has not left Bosnia for good, said prominent academic Muhamed Filipovic.

The declaration was followed by a horrible war that led to brutal crimes and genocide over the Bosniak population in the country.

The war in Bosnia and Herzegovina officially ended by an agreement signed on December 14, 1995 in Dayton, Ohio between the leaders of Bosnia, Serbia and Croatia.

According to the agreement, the country was divided into two entities - the Federation and the RS.

Emir Ramic, head of the Institute for Genocide Research from Canada, tells AA that all "relevant scientific research institutions in the world accept historically determined facts that foundations of the RS are aggression, genocide, crimes against humanity and war crimes."

RS founders and leaders, Biljana Plavsic, Radovan Karadzic, Ratko Mladic, Momcilo Krajisnik and others were convicted or are still on trial at the International Criminal Tribunal for the Former Yugoslavia in Hague, Netherlands.

RS President Milorad Dodik’s statement that the entity’s independence is a political objective means that the idea of further conflict still lies beneath, Filipovic says.

"Serbian patriarch Irinej’s statement that his visit to Banja Luka is a confirmation of RS’s statehood fits the same context," he says.

Patriarch Irinej was in Banja Luka, RS’s largest city, to serve the liturgy in the congregational temple on Thursday. Serbian Prime Minister Ivica Dacic also took part in the January 9 celebration in the city.

Senadin Lavic, president of the Bosniak cultural community Preporod, maintains that the celebration of January 9 is anti-civilizational act.

Emir Suljagic, head of the coordination of non-governmental organizations "Prvi mart", says January 9th symbolizes legitimization of the crimes against humanity and mass crimes that were committed during the Bosnian war.

"The fact that there is a political unit which celebrates mass crimes committed on fascist and even racist political platforms, because they were not killing only Bosniaks, but as they used to say, Turks... that is the biggest slap to the values of the EU and US, the biggest slap to universal values that the world is based on," Suljagic says.

While the Day of RS is itself regarded as controversial, Serbian Prime Minister Dacic chose the occasion to urge for fostering closer relations between Serbia and the RS, a statement Lavic thinks betrays hints of Serbia’s deep-seated ambitions.

"Serbia does not give up on its ideology of greater Serbia. It is obvious from the statements of politicians as to who sees the RS as a state," Lavic says.

Meanwhile, the Prosecutor’s Office in Bosnia and Herzegovina on Thursday filed an indictment against a concentration camp chief in Herzegovina during the Bosnian war.

Ivan Ancic, 52, is accused of murder, torture and starvation among other crimes during his charge at the Dretelj camp.

He reportedly had complete control over the camp which held over 2,000 Bosniak civilians - including teenagers and seniors - who were illegally imprisoned and detained for several months.

The indictment holds Ancic responsible for deaths due to beating and injuries, and for keeping prisoners without water and food for several days and denying them medical care.

The indictment is addressed to the Court of Bosnia and Herzegovina.

Ancic was head of the Dretelj detention camp during the armed conflict between Croatian Defense Council and Army of Republic of Bosnia and Herzegovina in 1993.

Bosnia's public health ministry puts the death toll in the conflict at nearly 150,000, while the real number is thought to be much higher.