"Better a banana in the hand than a Russian boot in the neck," read the billboard. 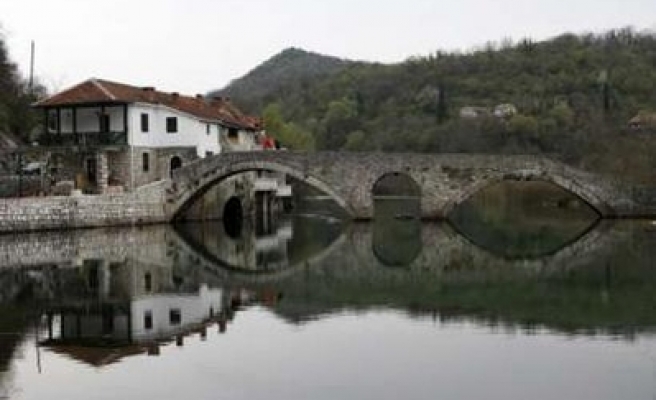 Russia has protested to Montenegro over anti-Russian billboards that popped up this month in the small Adriatic republic bearing the NATO logo and rejecting the "Russian boot".

The billboards, signed "Montenegrin Patriots", appear to allude to tensions between an influx of Russian money into the former Yugoslav republic and its hopes of joining the European Union and NATO.

The Montenegrin foreign ministry confirmed to Reuters that it had received a protest note from the Russian Embassy on Nov. 19, shortly after the billboards appeared.

It is not known who commissioned them. The NATO logo originally featured on the posters, but later appeared to have been removed.

Some refer to a number of controversial and stalled Russian investment projects, part of a flow of Russian money, homebuyers and tourists after Montenegro voted for independence in 2006.

The small Balkan country of some 680,000 people is now a candidate to join the EU and NATO.

One billboard quotes late Montenegrin-born, Yugoslav writer and politician Milovan Djilas as saying: "Russians have never been friends to the Montenegrins; we've always been bargaining chips to them."

Another alludes to a reported comment last year by Russia's ambassador to Serbia, Alexander Cepurin, in which he was quoted as likening Montenegro to a monkey, lining up to join NATO "in the hope of getting a banana".

"Better a banana in the hand than a Russian boot in the neck," read the billboard.

Contacted by Reuters, Montenegro's Ministry for Foreign Affairs and European Integration said in an email that it had replied to the Russian Embassy saying the messages on the billboards were "absolutely unacceptable" and in no way reflected state policy.

Serbia, which Montenegro split from in 2006, has sought to maintain warmer relations with Russia. Unlike Montenegro, it has refused to join European sanctions on Moscow over the Ukraine conflict despite also seeking membership of the EU.