Men in question are suspected members of the Bosnian Serb 'Jahorina' special police unit, dozen of whose members were already sentenced in Bosnia over Kravica killings 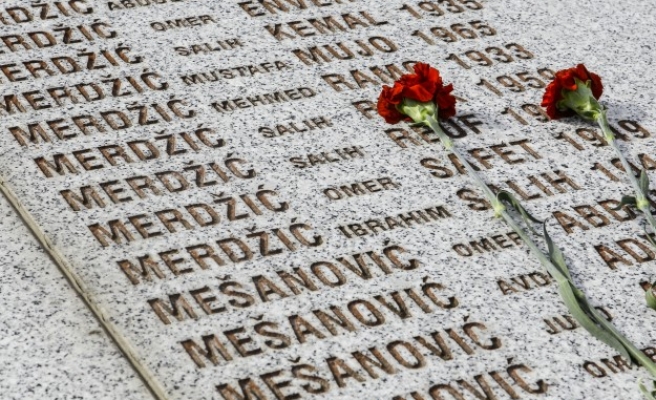 Serbia's war crimes prosecutor on Thursday charged eight men with participation in the 1995 slaughter of some 8,000 Muslims in Srebrenica, the worst atrocity in Europe since World War II.

Arrested in March, the eight were accused of ordering and participating in the execution of several hundred Muslims in a single day at a warehouse in the eastern Bosnian town of Kravica, near Srebrenica, a prosecutor's statement said.

If found guilty, they face the maximum penalty of 20 years in jail.

The indictment is a "message that there will be no impunity for war crimes and that the victims will not be forgotten," prosecutor Vladimir Vukcevic told AFP.

"The indictment reflects Serbia's position towards the most serious crime committed since World War II and it is the result of a good regional cooperation," he added.

Some 8,000 Muslim men and boys were killed and their bodies dumped in mass graves during the massacre, which became a symbol of the horror of the 1990s Balkan wars that accompanied the collapse of the former Yugoslavia.

The Kravica victims were caught as they fled through a forest and were then executed by Bosnian Serb police and the military, who packed them into the warehouse and began shooting and throwing grenades inside, according to the prosecutor and previous court hearings.

The eight are suspected members of the Bosnian Serb "Jahorina" special police unit, a dozen of whose members have already been sentenced in Bosnia over the Kravica killings.

One of those charged was the unit's commander,  Nedeljko Milidragovic, or "Nedjo the Butcher", who is accused of ordering the executions and saying "nobody should get out alive", the indictment said.

After they war, Milidragovic became a successful businessman in Serbia, local media reported at the time of his arrest.

The group has remained in custody since the arrests, the first by Serbian authorities over Srebrenica massacre.

Previous prosecutions linked to the Srebrenica massacre have been held by the Bosnian authorities and International Criminal Tribunal for the former Yugoslavia (ICTY).

The massacre began after Bosnian Serb forces commanded by General Ratko Mladic sidelined lightly-armed UN peacekeepers from the Netherlands who were overseeing a so-called "safe area" near Srebrenica, where thousands of Muslims from surrounding villages had gathered for protection.

Mladic and Bosnian Serb wartime political leader Radovan Karadzic are currently on trial before the ICTY for genocide, war crimes and crimes against humanity, some related to Srebrenica. Both were detained after years on the run.

The ICTY has so far charged 20 people in connection with the Srebrenica killings and several have been handed stiff sentences.

Remains of Kravica victims have been found in at least three mass graves, according to the prosecutor.

The Srebrenica killings were ruled to be genocide by two international courts.