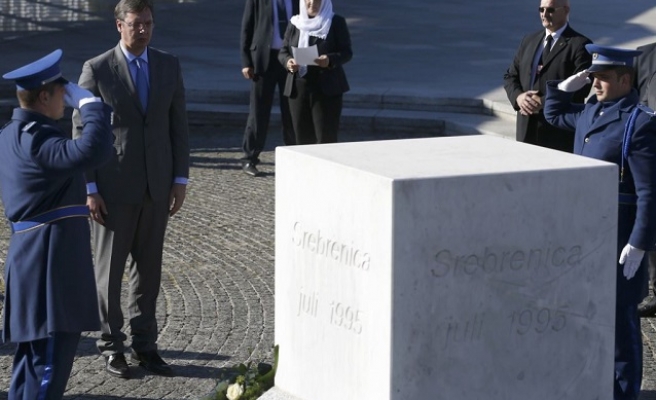 Serbian Prime Minister Aleksandar Vucic paid his respects Wednesday to Muslim victims of the 1995 Srebrenica massacre, four months after being chased from a ceremony in the Bosnian town by a stone-throwing mob.

Vucic, a former ultra-nationalist turned pro-European, laid a wreath of white roses at Srebrenica's memorial, in the presence of the town's Muslim mayor and Bosnian Muslim leader Bakir Izetbegovic.

Some 8,000 Muslim men and boys were killed by Bosnian Serb forces in Srebrenica in July 1995, near the end of Bosnia's 1992-1995 war, in the worst atrocity in Europe since World War II.

There was a heavy police presence at the memorial and in the town Wednesday for Vucic's visit, during which the Serbian premier is also set to speak at an economic conference.

The visit is Vucic's first to Srebrenica since July 11, when the crowd at a memorial ceremony marking 20 years since the atrocity started chanting "Allahu akbar" (God is greatest) and began hurling stones and bottles.

The premier was forced to run for cover, shielded by his bodyguards. Vucic said later that a stone hit him in the mouth but he was unhurt.

During the two-day economic conference Srebrenica authorities plan to present investment opportunities in the town, once the most prosperous in the Balkan country.

Srebrenica now has some 7,000 inhabitants compared with 37,000 before the conflict.

"We do not want to construct a new Srebrenica but to speak about what it was before the war and what can be done today in order to improve the living standard here," mayor Camil Durakovic said as he announced the conference recently.

During a visit to Sarajevo earlier this month, Vucic called for improved ties between Serbs and Muslims, saying this was "crucial" for the stability in the volatile Balkans.

He also announced that Serbia would invest in development projects in Srebrenica. Bosnia's 1992-1995 war between Croats, Muslims and Serbs claimed some 100,000 lives.

The conflict left the country split into two semi-independent entities -- the Muslim-Croat Federation and the Serbs' Republika Srpska.