No casualties were reported as rival groups of youngsters pelted each others with stones on a blocked bridge over the Ibar river, which divides the city into the northern Serb and southern Albanian parts. 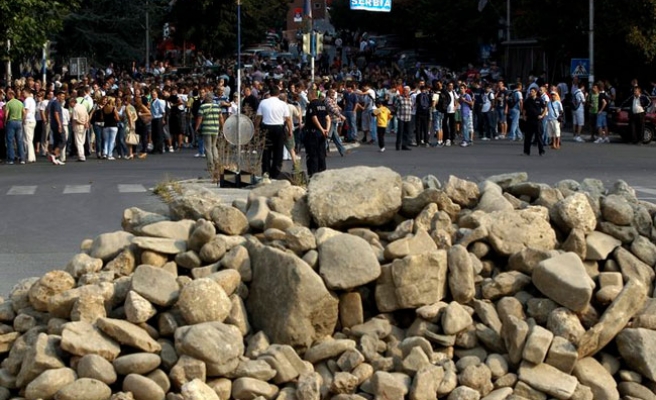 No casualties were reported as rival groups of youngsters pelted each others with stones on a blocked bridge over the Ibar river, which divides the city into the northern Serb and southern Albanian parts. NATO troops and European Union police cordoned off the two groups to prevent more violence.

On Saturday, a day after Pristina sent police and customs officials to two crossings with Serbia in northern Kosovo, local Serbs maintained blockades of two bridges in Mitrovica and on all main roads in the area with trucks, logs and gravel piles.

"It would be unrealistic to say people are not concerned and afraid, you just don't know what tomorrow brings," said Predrag, a Serb from Mitrovica's north.

NATO peacekeepers also remained at the two crossings, Brnjan and Jarinje, both about 100 km (60 miles) from Pristina.

In July, Pristina tried to install police and customs at the two crossings, previously staffed mostly by ethnic Serbs, to enforce a June 8 trade embargo with Serbia imposed after disagreements with Belgrade over customs procedures.

However, armed Serbs drove them back. One ethnic Albanian policeman was killed during the riots.

Kosovo authorities lifted the trade ban with Serbia on Friday under an EU-sponsored deal with Belgrade this month.

EU foreign policy chief Catherine Ashton welcomed the move. "It is in the interest of all sides to defuse tensions, calm down rhetorics and act responsibly," she said in a statement.

Belgrade, which opposes Kosovo's independence, has warned that taking over the crossings could lead to more clashes, but appealed for calm and more talks.

Borislav Stefanovic, a Serbian negotiator in EU-sponsored talks with Pristina, said the action of Kosovo authorities and EU police violated an agreement reached in Brussels this year.

Kosovo Prime Minister Hashim Thaci said re-manning the border posts did not target any ethnic group, including Serbs, and urged Belgrade to stop trying to destabilise the region.

Kosovo, a new state of around 1.7 million mostly ethnic Albanians, has been recognised by more than 80 countries, including the United States and most of the EU, since 2008.