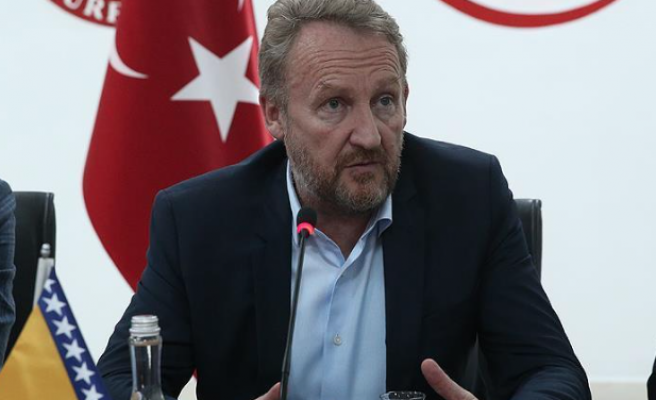 Mladic was jailed for life Wednesday by UN judges after being found guilty of crimes against humanity, including genocide in Srebrenica near the end of the country's brutal three-year civil war.

Referring to Mladic, Izetbegovic said “only a coward kills women, infants and civilians [or] attacks them.”

“We confronted what Mladic had done during today’s trial once again,” he added, referring to the July 1995 massacre of more than 8,000 Bosnian men and boys by units of the Bosnian Serb army in the town of Srebrenica in Bosnia-Herzegovina.

Mladic was also found to have had "significant responsibility" for the genocide at Srebrenica.

Recalling the decision of the International Criminal Tribunal for the Former Yugoslavia, Izetbegovic said Mladic would be remembered as “a war criminal” for his mass killings in Bosnia.

"The court has clearly stated that Mladic wanted to destroy Muslims in Bosnia and Herzegovina and that Bosnian Serbs had committed persecutions in these lands."

Izetbegovic said Mladic must no longer be portrayed as “a hero”.

"To be able to build a common future, stop writing songs about Mladic. Stop naming streets after him and stop building monuments to him. I think today's decision will stop such actions in Bosnia and Herzegovina.”

Regarding Mladic’s criticism of the court’s decision, Izetbegovic said “there is nothing to defend in it”.