Srebrenicans to take UN and Holland cases to ECHR

Hagerdorn stated that they would also sue Holland because of giving a judicial immunity to the UN that proves Mother of Srebrenica got a raw deal. 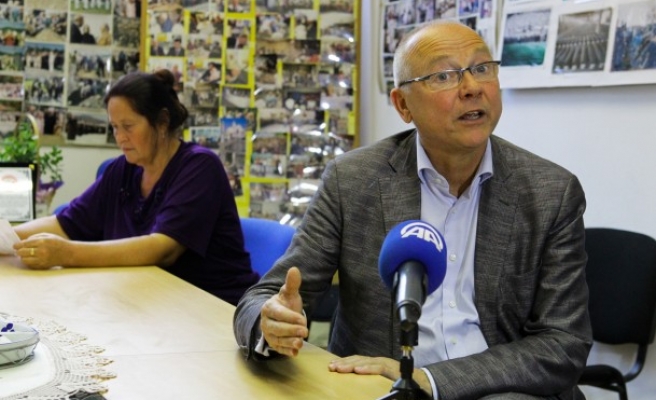 The association that unites together victims of Srebrenica massacre will take United Nations (UN) and Holland to the European Court of Human Rights (ECHR) because of believing UN and Holland are responsible for the genocide during the Bosnian War in 1995.

Speaking to Anadolu Agency on Tuesday in Sarajevo, lawyer Axel Hagedorn who is representing relatives of victims of Srebrenica massacre, said that they would take the cases against UN and Holland to the ECHR in November.

Hagerdorn stated that UN was guilty because of its action on Bosnian War. He said that UN could prevent the massacre during the war while it had an opportunity.

"If a massacre took place in front of UN, and if the UN did not protect those people from massacre, victims of massacre are able to sue the UN in an independent court and the court rules whether UN is guilty. However, Mother of Srebrenica are not entitled with this right," said Hagerdorn.

Hagerdorn stated that they would also sue Holland because of giving a judicial immunity to the UN that proves Mother of Srebrenica got a raw deal.

"In 1999, in a written statement UN accepted its great mistakes in Srebrenica, those were not ordinary mistakes. After 17 years of the massacre, nobody came up and took the responsibility from the UN side. Nobody asked that how those mothers could get help. In brief, UN has done nothing until the present time and it denies its
responsibility for the massacre," the lawyer said.

Dutch High Court had ruled on April 13 that the families of men and boys who were killed in the Srebrenica massacre during the Bosnian War could not take the UN to court for failing to protect them.

More than 8,000 Bosnian men were exposed to massacre in Srebrenica during the war in Bosnia, on July 11, 1995.

The war in Bosnia that lasted 3.5 years and continued with the genocide in Srebrenica came to an end in 1995 with the Dayton Peace Agreement. Around 100,000 were killed, 500,000 women were raped by Serbs and 2.5 million people had become refugees. Following the ethnic cleansing, almost no Muslim population was left in the cities of Srebrenica, Foca, Zvornik, Bratunac and Visegrad in the east of country.