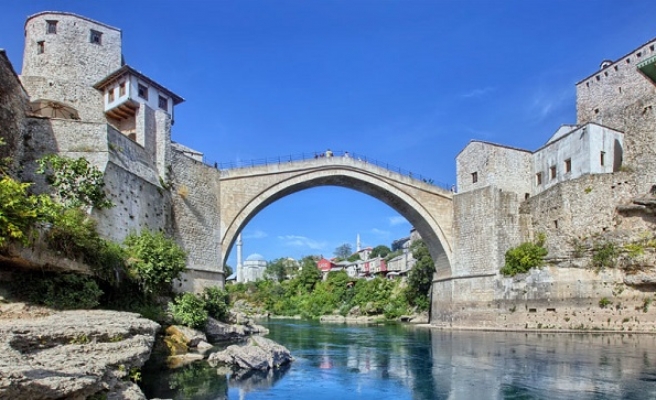 Ethnic tensions are beginning to rise again in Bosnia and Herzegovina’s historical city of Mostar as it edges close to local elections this year.

The elections, if held in October like in the rest of the country, will be the first after a gap of eight years in the city.

Mostar has been administratively divided into six municipalities, equally between Bosnians and Croats since the Bosnian War in 1995.

Bosnians live mainly in the eastern part of Neretva River, while Croats are on the western side.

In 2004, former High Representative for Bosnia-Herzegovina Paddy Ashdown had taken an initiative to bridge differences between two sides in the city by issuing a new statute aimed at establishing a single municipality in Mostar.

But the regulations could not be confirmed and put into action due to opposition by Croats, who feared Bosnians would get equal or even more rights in parts of the city where the Croats are in majority.

Because of the statute issued in the city, local elections were not held in Mostar in 2012 like they did in 2008. Leaders on both sides had failed to agree in Bosnia's House of Representatives, one of two chambers of parliament, eventually paving the way for the Constitutional Court to declare that the electoral statute of the city was unconstitutional. As a result, the municipality remains without a city council since 2012, which has created severe management issues in Mostar.

Mostar Mayor Ljubo Beslic, who belongs to the Croatian Democratic Union, today functions as a unitary authority elected through six voting units. Every unit has the same number of councilors despite different number of voters in the unit.

The Bosniak Party of Democratic Action is the other main party in the city.

- Three provocations in one week -

Last week, a Croatian flag was drawn on nearby mountain Planinica on the Croats-majority side of the city, which sparked outrage among Bosnians, who objected that the city was not part of Croatia, but Bosnia.

In the same week, an unidentified person threw a stone inscribed with "do not forget 93" in the Neretva River, which too created anger among Bosnians. The stones symbolically represent the Old Bridge, which was destroyed in 1993 by Croats.

Also, a sign that bore names of the countries that contributed to the reconstruction of the Old Bridge has been damaged within the same week.

Bosnian leaders have so far fallen short of resolving the ongoing struggle for organizing local elections in Mostar.

"If there are four plenipotentiary municipalities in Sarajevo, I do not think there would be a problem for Mostar to have four or six municipalities," Izetbegovic said.

Dragan Covic, Croation member of the council, said Sunday his side was ready to offer solutions. "Unfortunately, I did not receive any comments on our party's solution offer. I think no one read our proposal. I want everyone to read the solution we propose," Covic said.

But while both leaders reviewed their own proposals, they neither offered any reactions to the recent acts of provocations in Mostar nor urged the public to stay calm. It is because of this indecisiveness that it now remains unclear whether Mostar will go into local elections in October this year or not like in the rest of the country.

Apart from being a tourist attraction, the bridge has a significant piece of history attached to it.

In fact, Mostar city is mostly known for its iconic Old Bridge that connects the eastern and western side of the city, which is constructed alongside the Neretva River.

The Old Bridge was built between 1557 and 1566 after the citizens of Mostar requested Sultan Suleiman the Great for one.

However, on Nov. 9, 1993, the Old Bridge was destroyed by heavy fire from Croatian forces. The International Criminal Tribunal for former Yugoslavia had sentenced former Bosnian Croat leader Jadranko Prlic and five co-defendants to 10 and 25 years jail time on charges of "ethnic cleansing" of Bosnian Muslims and destruction of the Ottoman-era Old Bridge of Mostar during the breakup of Yugoslavia in the 1990s.

But while the bridge was reconstructed in 2004, which one hoped would reunite the city’s east and the west, people continue to struggle living together in the small Bosnian city. In fact, today it is known as the 'most divided city' in Bosnia.

Citizens in Mostar hope the divide between the two peoples will end one day. They also believe the recent acts of provocations were nothing but "dirty election games" and "political tricks" designed at increasing tensions between ethnic groups before local elections are due.

Adisa Maslo Hadziomerovic told Anadolu Agency on Tuesday that all such provocations are being carried out to prove who is a better Bosnian or Croat. "Unfortunately, this is proof that nationalism winds the minds," Hadziomerovic said.

Vera Soldo, a journalist, also condemned the recent attacks on the historical bridge of Mostar and pointed out that the bridge comes under protection of United Nations Educational, Scientific and Cultural Organization.

Another citizen, Irma Pehilj, called for unity in Mostar.

Pehilj said: "Mostar is not only the most beautiful city of Bosnia, it is also in the world. Let's be one. Let's defend our city with love."