Thousands protest in Romania ahead of presidential run-off vote

Protests first broke out on Nov. 8 when thousands gathered in city squares in support of compatriots living abroad who were turned away as they tried to vote in the first round 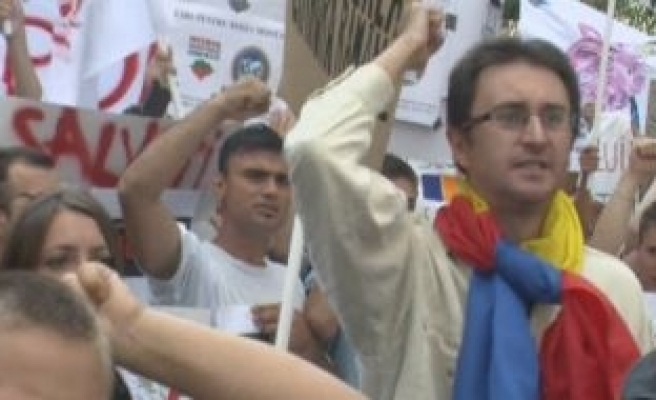 Thousands of Romanians joined anti-government protests in a number of cities on Friday to demand fair elections, two days ahead of a presidential run-off vote that has been overshadowed by complaints of poor organisation of the ballot overseas.

Protests first broke out on Nov. 8 when thousands gathered in city squares in support of compatriots living abroad who were turned away as they tried to vote in the first round, prompting Romania's foreign minister, Titus Corlatean, to resign on Monday.

Long queues and bureaucratic hurdles made the voting process lengthy at Romanian embassies across the European Union and elsewhere in the first round. Many were unable to cast their ballots before voting ended.

The government has taken measures to ensure the Nov. 16 vote runs smoothly, increasing the number of voting booths and staff abroad. But it has not increased the number of polling stations, as Romanian diaspora groups had demanded.

Up to four million Romanians are believed to live abroad, mostly in western Europe. Although only a small number of them bother to vote in elections, they can influence the outcome, as in 2009 when President Traian Basescu won a second term by a margin of just 70,000 votes, mostly cast abroad.

Romanian television showed large crowds of protesters marching towards government buildings in Bucharest on Friday evening, partially blocking traffic on one of the capital's busiest boulevards.

Thousands more protested in other cities including Cluj, Timisoara, Sibiu and Brasov, carrying banners that read "We care", "Solidarity with the diaspora" or "Vote with your head, not your stomach".

Ponta has trumpeted his record of easing austerity and cutting some taxes while pledging wage and pension hikes in one of the EU's poorest member states.

Political analysts say a Ponta win could bring stability after years of bickering between him and Basescu, but it may also raise concerns about the independence of the judiciary.

Data showed that 46 percent of the 160,056 Romanians who voted abroad in the first round on Nov. 2 backed Iohannis while just 16 percent voted for Ponta.

Overall, Ponta, a former prosecutor and amateur rally driver, won 40.4 percent of the first round vote, 10 points ahead of Iohannis.