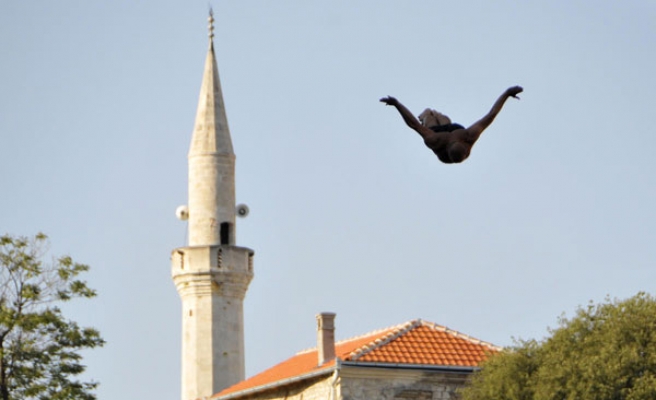 Traditional manifestation was held for the 447th time in Mostar, the biggest city in southern Bosnia and Herzegovina. Each time, tens of thousands of spectators line the banks adjacent to the Old Bridge that crosses Neretva river.

The Old Bridge, one of the UNESCO heritage sites, is about 27 meters high, and it attracts jumpers from all around the world. This year 80 people applied, but the title went to 34 years old Lorens Listo, for the seventh time.

Speaking to the Anadolu Agency (AA), Listo said that he is jumping from the Old Bridge for 14 years, and the first title he won was in 2003. Listo explained that to jump from the Old Bridge into the cold river is considered as tradition for the men in the city.

“When I was a child, I used to swim in Neretva and to look at other people jumping form the bridge. With six-seven years I started jumping from some places not that high as the Old Bridge,” Listo recalls saying that he was all the time dreaming about “the big jump”. And for him it happened in 2000.

“Today, I have to say that my second jump was really scary. The first time I did not know what to expect,” Listo said adding that he was hoping the contact with the river would not be that hard as it is. Yet, he decided to perform the most dangerous type of jumps called Lasta (swallow).

“It is the most beautiful jump to see, but it is very dangerous. I have to practice a lot during the whole year to be able to do it,” Listo said.

Even though manifestation is international, and people from many countries are coming, the biggest competition is between jumpers from the region, that Listo respects the most.

The event is considered as one of the original “extreme sports” and it goes back centuries. Judges assess dives based on three specific criteria, including their posture at the bridge, the quality of the dive and how well they contact the water, with the less splash the better.

The Old Bridge was built between 1557 and 1566 during Ottomans in Bosnia, and it is considered as one of the most beautiful monuments left from that time. The name of the city comes from the word bridge (most).

The Bridge was ruined in 1993 during the war between Croat forces and Bosnian Army, but it was rebuilt in 2004.