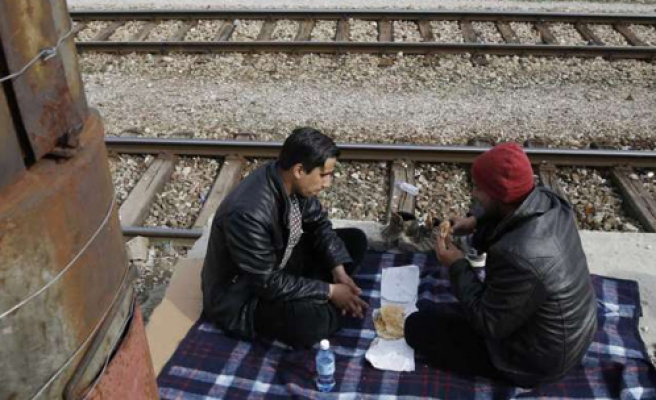 After risking his life to get out of Afghanistan, Jamshid is out of luck -- he arrived in Greece just as Balkan states further north shut their doors to Afghan nationals.

Now he and hundreds of fellow Afghans face an uncertain future at the Greek camp of Schisto, waiting for a path to Europe that may never reopen.

“When we arrived at Macedonia border we got the news that Afghans cannot pass the border, only Syrian can pass the border. This is really a big discrimination," says the 24-year-old Kabul resident, who says he previously worked as an American army translator.

"In Syria there is five years of war, in Afghanistan there is more than three decades of war. (The ISIL group) exists in Syria, (it) exists in Afghanistan. What’s the difference between Afghans and Syria?" he wondered.

Thousands of refugees and refugees have been stranded in Greece after Macedonia abruptly closed its border to Afghans last week and imposed stricter document controls on Syrians and Iraqis, slowing their passage to a trickle and rejecting those without valid passports.

Skopje's move follows decisions by countries further up the refugee route to turn back groups of Afghans, after reports that many were actually Iranians or Pakistanis.

Jamshid claims he was mistreated after being intercepted by Macedonian police.

"Around 30 of us tried to cross the border. The Macedonian police caught us, beat us and put us on a truck."

Mohammad, a 22-year-old engineering student says Macedonia police were not even interested in looking at his papers.

Another man said seven of his group disappeared near the Albanian border where they heard shots being fired.

Austria has also clamped down with a daily cap on asylum-seekers and said it would only let 3,200 refugees pass through each day, sparking fears of a domino effect along the Balkan refugee trail.

"It's not our vision to become the subsidised border guards of Europe, to become Europe's Lebanon or Jordan," Greece's deputy prime minister Yiannis Dragasakis said Friday.

An old army camp at the heart of an industrial storage area near the port of Piraeus, Schisto was recently refurbished by the Greek army to accommodate some 1,500 people.

"Out of 1,300 people here, a third are children," Klouvas said, adding that he would prefer "for the problem to be resolved soon so that people don't have to stay here long."

The hastily-renovated camp houses hundreds of families in tents, with separate buildings acting as a first aid area, a mess hall, a place of prayer and shelter for unaccompanied minors.

Children sit on the ground, playing with pebbles, and teenagers play volleyball and older men mill about aimlessly.

Many are desperate to continue their journey northwards and do not wish to wait, even when told that Macedonia may not let them through.

Further north, hundreds of refugees and refugees have walked out of similar camps in an effort to get to the border on foot.

But others are too weak to even try.

Outside one dormitory, a woman helps a man in his fifties who is sitting in a wheelchair, his feet wrapped in bandages, his head bowed low.

Karim Mandi, has brought to the doctor his five-year-old son, whose ankles are in pain from walking.

"My son cannot walk (but) the doctor has told us to wait because there is no more medicine," he says.