With many countries now clamping down again and closing their borders, refugees and migrants are being left stranded 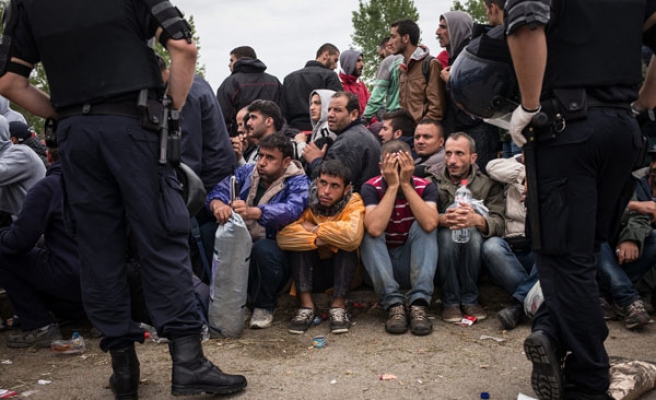 Refugees from war-torn Middle Eastern countries are increasingly becoming stranded on the borders of Balkan countries as European borders close and the rain and cold of winter set in.

Despite borders being closed and open periodically the situation has deteriorated sharply in recent days. While Croatia - which has taken in 210,000 refugees since mid-September – re-opened its border with Serbia on Monday, it has enforced restrictions on entry, only letting in groups of around 50 to 100 people in at a time.

Since Tuesday evening, 3,500 refugees and migrants have been stranded at the Berkasovo-Bapska crossing. After enduring wet and near freezing conditions overnight, many people decided to brave alternative routes, journeying around the main border station to enter Croatia illegally through fields and orchards on Wednesday morning.

Many refugees - from Syria, Iraq, Afghanistan and Iran - reported being seperated from their families at the border.

“I waited on the border with Croatia for three days without food in the rain, in the water, in the mud , Bachar Khan, a 24-year-old journalist from Nuristan, Afghanistan, who was waiting to be taken off of a train at Cakovec in northern Croatia said. “I lost my whole family.”

“I looked and there is my wife, on the other side, and I was here - I wanted to go with my wife but I couldn’t get through. My wife is pregnant. I don’t know where she is now. I don’t know anything… I lost everything.”

Once in Croatia, people tend to make their way north, but with closures now also in place in Hungary and Slovenia, bottlenecks are building up across the Balkans.

Hungary closed its border with Croatia last Friday at midnight, halting the flow of refugees along a well-trodden route through the country to Austria.

Hungary has since been prosecuting and imprisoning anyone who tries to get through the steel and razor-wire fence it completed on its southern border.

In response to this border closure, Slovenia agreed to allow refugees through its territory towards Austria, but has limited the flow of people entering each day, leaving, thousands of refugees waiting on its border.

An EU summit on the issue has been called for Sunday, but aid workers fear it might be a case of too little too late and that not enough will be done to create a more efficient and safer “refugee corridor”.

”A collective response is missing. Europe has not been able to manage the whole issue. Closing borders, putting up fences is not going to be solution to the refugee crisis,“ he added.