Turkish people participated in 'death march' in memory of those killed in horrific act of genocide in Srebrenica in July 1995. 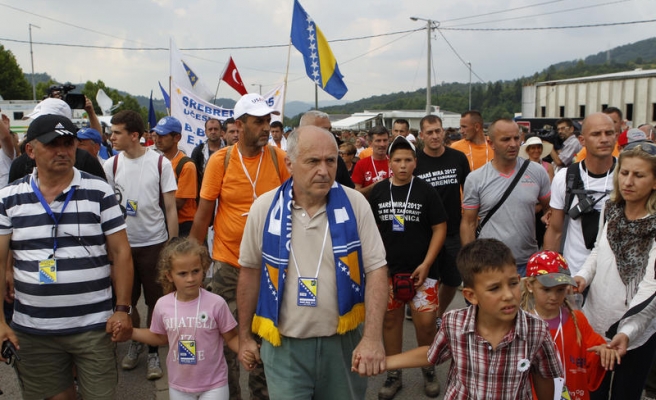 Turkish people reached Potocari, participating in the 'death march' which is conventionally arranged on the road via which Bosnian people escaped from genocide to reach Tuzla city after Serbian troops' occupation of Srebrenica in the east of Bosnia Herzegovina on July 11, 1995 under Ratko Mlaic's command.

Among those participating in the march from different countries such as Spain, USA, Saudi Arabia, Georgia, Germany, Austria and several European countries, a group from Turkey reached Potocari mausoleum after a three-day march, stood in silence for genocide victims and prayed.

Starting out from Nezuk town of Bosnia Herzegovina and marching about a 150 km distance, a Turkish citizen, Muhsin Engin, stated he participated in the march for the third time this year and he was glad to have reached his ambition despite the hardship during marching.

Noting the cruelty committed to Bosnians should be evoked, Engin said, "We are here so that similar genocides do not occur again. We are happy to be with Bosnian people."

Mustafa Cumoglu, another Turkish citizen, also expressed he was glad to be with Bosnians and share their sorrows.