Bosnia-Herzegovina's bid to join NATO is significant for the country's stability, says its first female commander in Sarajevo 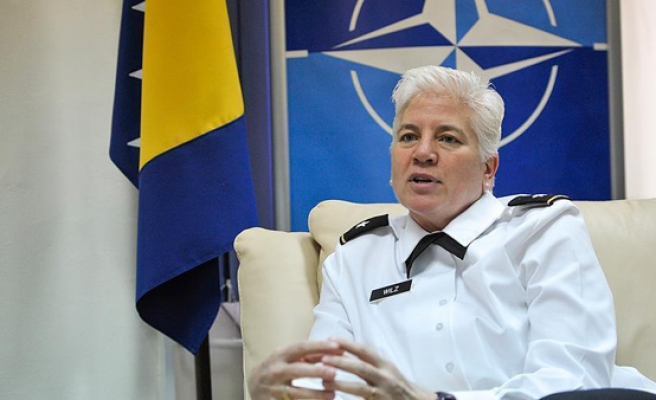 “Bosnia and Herzegovina's NATO membership will bring economic development, stability, national and regional security, and a professional military force to the country, like the other NATO allies. Today, NATO membership is extremely important in terms of security issues,” Wilz said.

Wilz touched on the 20th anniversary of the Dayton peace accord that ended the war in Bosnia-Herzegovina.

“NATO is part of the solution process. NATO also gives advice to Bosnian authorities to help them fulfill their commitments. They have come a long way in this process in the last 20 years.”

The Dayton accords, begun at Wright-Patterson U.S. Air Force base near Dayton, Ohio in November 1995, ended a brutal ethnic war in Bosnia that resulted in around 100,000 deaths over three-and-a-half years.

The capital Sarajevo was left in ruins after a siege that lasted nearly four years – longer than the war itself by the time Serb forces left their positions – and became a symbol of the war’s savagery.

NATO keeps at least 60,000 troops available to enforce the accord, Wilz added.

The U.S. commander said that maintaining Balkan’s regional security is not only important for the region but also critical for other countries.

“Supporting and giving advice to its alliance members and partners is NATO’s role in this region,” she said.

“Bosnia and Herzegovina are located at the center of this region, so they are very important.”

Bosnia-Herzegovina has been discussing its membership aspirations with NATO since 2008 and has contributed to NATO-led missions in Afghanistan since 2009.

Bosnia also enjoys visa liberalization with the European Union’s Schengen Zone and has signed a Stabilization and Association Agreement with the EU.