Armenia PM storms out of talks with opposition leader

Pashinyan and two other opposition politicians "were detained as they were committing socially dangerous acts", the prosecutor general's office said in a statement. 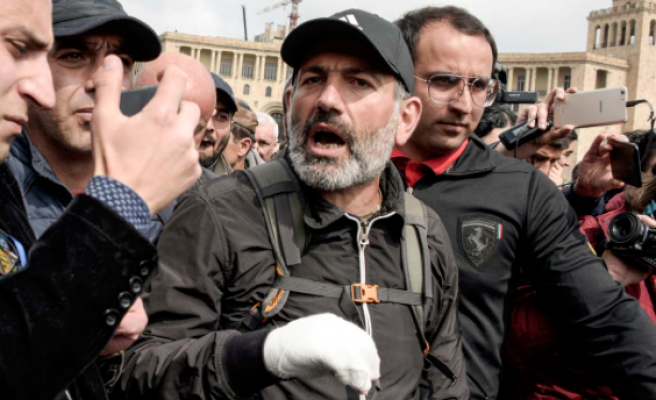 Armenia's political turmoil deepened on Sunday with the detention of anti-government protest leader Nikol Pashinyan, shortly after Prime Minister Serzh Sarkisian stormed out of talks with him on the tenth day of mass rallies against his rule.

As a lawmaker, Pashinyan is protected by parliamentary immunity and cannot be arrested without the approval of fellow MPs.

On Sunday morning, Sarkisian stormed out of talks with Pashinyan, accusing him of "blackmail".

The televised meeting between the premier and Pashinyan lasted only a couple of minutes before the premier walked out.

"I came here to discuss your resignation," Pashinyan, the leader of the opposition Civil Contract party, had told the prime minister in front of the cameras.

"This is not a dialogue, this is blackmail, I only can advise you to return to a legal framework... Otherwise you will bear the responsibility" for the consequences, replied Sarkisian, a former military officer.

"You don't understand the situation in Armenia. The power is now in people's hands," Pashinyan hit back.

Sarkisian said the Civil Contract party "can't speak on behalf of the people", having scored only 8 percent in recent parliamentary election, before he walked out of the meeting room in Yerevan's Marriott hotel.