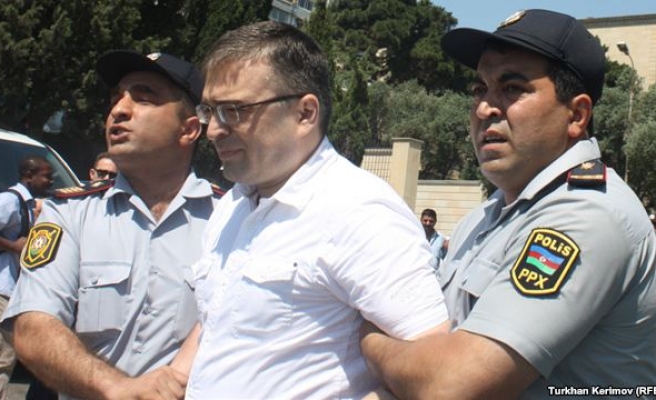 A jailed Azerbaijani opposition leader has been  severely beaten in the head by prison guards, his lawyer said on Monday, urging the authorities to launch a probe.

Ilgar Mammadov, the leader of opposition Republican Alternative (REAL) movement, had been "badly beaten by a deputy prison chief and another warder on Friday," said Mammadov's lawyer, Javad Javadov.

"My client was beaten in his head and is suffering from persistent headaches," the lawyer said in a statement.

"I've demanded that the prosecutor general, the justice ministry and the country's ombudsman launch an investigation into the incident."

There was no reaction from the authorities in the tightly-controlled South Caucasus nation of 9.5 million people.

Mammadov, 45, was widely expected to run in the October 2013 presidential election but was arrested prior to the race.

In March 2014, Mammadov was sentenced to seven years in jail for "inciting anti-government riots."

Described as a "prisoner of conscience" by rights group Amnesty International, he was arrested in February 2013 and accused of being behind protests that turned into violent clashes in the town of Ismayilli the previous month.

He denied any role in the clashes, which saw police use rubber bullets, tear gas and water cannon to disperse thousands of protesters after residents set several buildings and cars on fire.

Any display of public discontent and political dissent usually meets a tough government response in Azerbaijan.

Rights groups say the government of the energy-rich nation has clamped down on opponents since Aliyev's re-election in 2013.