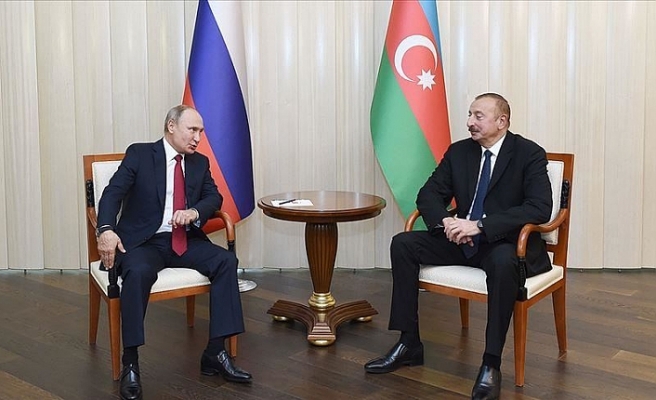 Azerbaijani and Russian leaders discussed the ongoing fighting between Armenia and Azerbaijan over the Upper Karabakh conflict in a phone call, the Azerbaijani Presidency said on Wednesday.

Ilham Aliyev and Vladimir Putin also exchanged views on the issues related to prospects of bilateral relations between Azerbaijan and Russia, said the written statement.

Aliyev congratulated Putin on his birthday and wished him the best of health and success in his state activities for the development and prosperity of Russia.

Putin thanked his Azerbaijani counterpart for his attention and congratulation, it added.

Azerbaijan's parliament declared a state of war in some of its cities and regions following Armenia's border violations and attacks in the region.

On Sept. 28, Azerbaijan declared partial military mobilization amid the clashes.

The international calls for a halt to fighting have gone unanswered. Armenia has continued its attacks on civilians and Azerbaijani forces, who are the rightful owners of the occupied region, as recognized by the UN.

Relations between the two former Soviet republics have been tense since 1991, when the Armenian military occupied Upper Karabakh, or Nagorno-Karabakh, an internationally recognized territory of Azerbaijan, and seven adjacent regions.

Some 20% of Azerbaijan’s territory, including Upper Karabakh, has remained under illegal occupation by Armenia for roughly three decades.

Over 1 million Azerbaijanis became internally displaced people, while 20,000 were martyred by Armenian forces and 50,000 were wounded and became disabled, according to Azerbaijan's official figures.

At least 4,000 Azerbaijanis went missing during the conflict and their fate remains unknown.

More than 2,000 Azerbaijanis were captured and taken hostage by Armenian forces.

The OSCE Minsk Group – co-chaired by France, Russia, and the US – was formed in 1992 to find a peaceful solution to the conflict, but to no avail. A cease-fire, however, was reached in 1994.

Many world powers, including Russia, France, and the US, have urged an immediate cease-fire. Turkey, meanwhile, has supported Baku's right to self-defense.