All eight, aged between 18 and 28, were arrested in March 2013 during protests in the capital Baku against violence within the armed forces prompted by the death of conscript Jeyhun Gubadov at a barracks 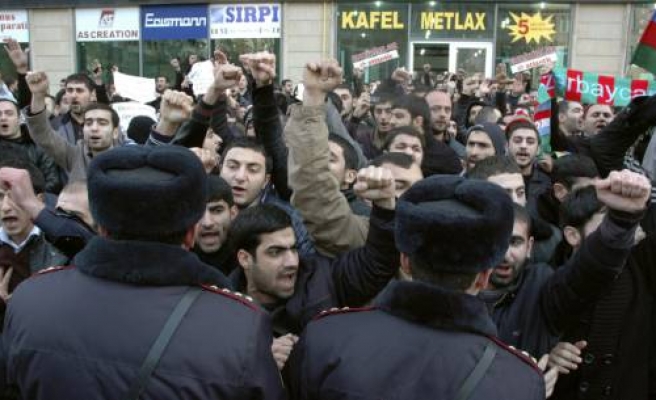 Azerbaijan sentenced eight opposition youth activists on Tuesday to between six and eight years in prison in a case that critics say highlights a government-led crackdown on dissent in the oil-rich former Soviet republic.

Azerbaijan, a largely Muslim state in the South Caucasus, serves as a transit route for U.S. troops in Afghanistan as well as a source of energy supplies destined for Europe.

But the strongman rule of President Ilham Aliyev has been lambasted by international rights organisations for curbing freedom of speech.

Eight activists of NIDA, an Azeri non-government youth movement, were jailed after being convicted on charges of hooliganism, possessing drugs and explosives as well as intent to cause public disorder.

All eight, aged between 18 and 28, were arrested in March 2013 during protests in the capital Baku against violence within the armed forces prompted by the death of conscript Jeyhun Gubadov at a barracks - the latest in a string of non-combat deaths under murky circumstances in the military.

"This process was politically motivated from the very beginning," defence lawyer Khalid Bagirov told reporters. "It's clear that authorities want to intimidate the youth and prevent any protests in the country."

Bagirov said defence lawyers would appeal against the verdict.

Amnesty International demanded the "immediate and unconditional release" of the NIDA activists as well as other "prisoners of conscience".

"This verdict is an affront to human rights and a timely reminder of Azerbaijan's continued refusal to respect basic freedoms," said Denis Krivosheev, Europe and Central Asia Deputy Director at Amnesty International.

"Intimidation, detention or imprisonment are fast becoming the choice responses of a regime desperate to control and punish critics and dissenting voices."

Nils Muiznieks, human rights commissioner at the Council of Europe, said last week that freedoms were deteriorating in Azerbaijan. He called on the authorities to uphold regional standards and voiced concern at a "worrying pattern" of abuse.