'Armenian armed forces violated the ceasefire 130 times during the night. They were shooting from mortars, grenade launchers, and large-calibre machine guns,' Baku says 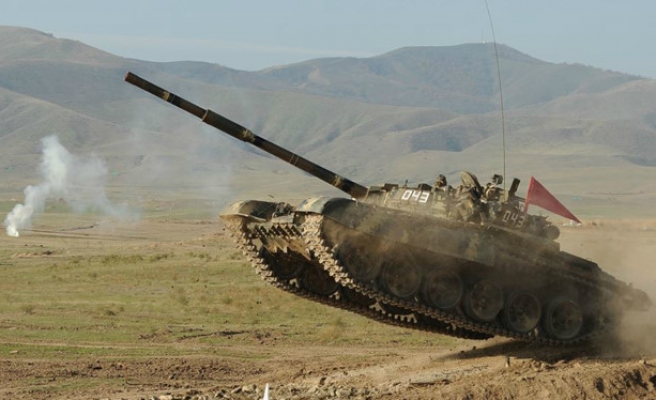 Sporadic fighting between Azeri and Armenian forces was reported Sunday, a day after Russia and the West appealed for calm following clashes that killed some 30 troops in the worst violence in decades over the disputed Nagorno-Karabakh region.

Both sides said there had been intermittent clashes overnight and on Sunday as well, accusing each other of using heavy weapons, tanks and artillery and of pulling the trigger first.

"Armenian armed forces violated the ceasefire 130 times during the night. They were shooting from mortars, grenade launchers, and large-calibre machine guns," Azerbaijan's defence ministry said in a statement.

"The shelling was carried out from both Armenian territory and from Armenian-occupied Karabakh," the statement said. "The Azerbaijani army returned fire."

"Azerbaijanis are attempting to attack but are being repelled," he said. "The situation is tense, but there is no panic."

The Armenian-backed rebel defence ministry in Karabakh meanwhile said that "Azerbaijan renewed shelling its positions on Sunday morning from rocket-propelled artillery and tanks."

Fierce clashes left at least 18 Armenian and 12 Azerbaijani soldiers dead Saturday and reportedly claimed the lives of two civilians after both sides accused each other of attacking with heavy weaponry across the volatile frontline.

Armenia's President Serzh Sarkisian called the clashes the "largest-scale hostilities" since a 1994 truce ended a war in which Armenian-backed fighters seized the territory from Azerbaijan.

Azerbaijan said one of its helicopters was shot down as its forces took control of several strategic heights and a village in Armenian-controlled territory, but Yerevan denied Baku had made any advances.

Both Russia and the West appealed to all sides to show restraint, with key regional power broker President Vladimir Putin calling for an "immediate ceasefire".

US Secretary of State John Kerry urged the arch foes to return to peace talks under the auspices of the Organisation for Security and Cooperation in Europe (OSCE), reiterating "there is no military solution to the conflict".

Turkish President Recep Tayyip Erdogan meanwhile vowed to back traditional ally Azerbaijan "to the end" in the conflict.

"We pray our Azerbaijani brothers will prevail in these clashes with the least casualties," he said, blasting the longstanding failure of the Minsk Group -- which spearheads efforts by the Organization for Security and Cooperation in Europe to find peace -- to resolve the conflict.

"If the Minsk Group had taken fair and decisive steps over this, such incidents would not have happened," he said.

Ethnic Armenian separatists backed by Yerevan seized control of the mountainous Nagorno-Karabakh region in an early 1990s war that claimed some 30,000 lives and the foes have never signed a peace deal despite the 1994 ceasefire.

The region is still internationally recognised as part of Azerbaijan and the two sides frequently exchange fire, but the latest episode marked a surge in violence and sparked frantic appeals for peace from international powers.

Energy-rich Azerbaijan, whose military spending has in the past exceeded Armenia's entire state budget, has repeatedly threatened to take back the breakaway region by force if negotiations fail to yield results.

The last big flare-up occurred in November 2014 when Azerbaijan shot down an Armenian military helicopter.