With Moscow turning a blind eye to President Kadyrov's oppression, many Chechens seek asylum in Europe with some said they were punished in Chechnya for refusing to join Kadyrov's men, including to fight in Syria and eastern Ukraine. 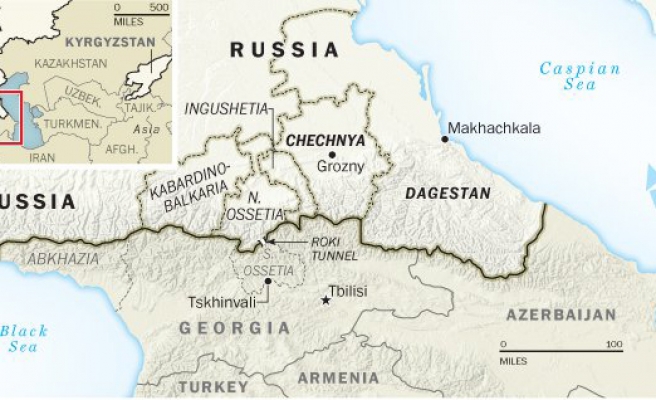 On a snowy day a commuter train leaves the Belarusian border city of Brest as usual for the town of Terespol in EU member Poland just a few kilometres away.

Half the train is made up of regular cross-border travellers, but two carriages are filled with Chechens fleeing to Europe from their homes in the faraway Russian Caucasus region, where authorities have made their lives unbearable as the Kremlin looks away.

Those leaving are often accused of rebel or anti-regime activities, or have become embroiled in blood feuds. Many victims say they have no idea who is targeting them, or why.

Twenty-year-old Maga shows AFP pictures of his back streaked with gashes. His forearms are also covered in scars -- injuries sustained from masked men who came without warning, he says.

"We don't know who they are. They put a bag over your head, they take you away, beat you and torture you, and we never know for what," Maga said.

He, like other Chechens interviewed by AFP in Brest in late December, asked to be identified with a fictional name out of fear of reprisals from authorities in his native region.

Chechen leader Ramzan Kadyrov, who has led the majority-Muslim region with an iron fist since 2007, is accused by rights groups of running Chechnya like his personal fiefdom.

People's disappearances are widespread as well as allegations of involvement in torture and kidnappping by his unofficial security force, known as the Kadyrovtsy.

Many Chechens trying to escape the tyranny say they are not safe in other Russian regions because Moscow overlooks Kadyrov's abuses, instead hailing him for bringing order to a region ravaged by two separatist wars in the 1990s and early 2000s.

Human Rights Watch said, in an August report on Chechnya, that the "increasingly abusive crackdown seems designed to remind the Chechen public of Kadyrov's total control".

People are terrified of talking to journalists because of "a climate of fear", it added.

With documents and photos alleging abuse, Chechens were once able to seek refuge in Europe via Belarus, a Moscow ally which does not have a formal border with Russia.

But several months ago, Polish border guards began turning most people away, so the Chechens return to Brest by train three hours later.

On the 20-minute ride, Chechen men smoke with trembling hands after Poland allowed only two families and a young man through.

"I asked for political asylum, but they wouldn't even look at my documents," said 20-year-old Alan, after his 44th failed attempt.

Some have made so many trips they are running out of pages in their passports.

Others are wives and widows caught up in Chechnya's conflict against rebels.

There are also Chechens whose police duties saw their families targeted in blood feuds, and those who crossed or criticised Kadyrov.

The Chechen leader has said those trying to leave for Europe are "not refugees" but rather pawns of European security services.

"Some say 'I wasn't tortured, only beaten with a hose and doused with icy water'," said Vyacheslav Panasyuk, a rights activist with Belarusian NGO Human Constanta who has worked in Brest for five months.

"They think only electrocution or needles stuck under their nails is torture."

Panasyuk estimated there are about 1,000 Chechens stuck in limbo on the border between Belarus and Poland.

"They are running for their lives," he said, voicing concern about those who gave up and returned to Chechnya promising him to send word they were okay but never did.

"I don't know what happened to them there," he said.

Polish media has reported that 61,000 Russian citizens were refused entry into Poland from Belarus between January and September 2016, compared with 10,000 for the same period in 2015.

Poland's border control authorities did not respond to requests for comment about Chechen asylum seekers.

'They looked for me everywhere'

Zulikhan, a slender 24-year-old, has made 36 attempts to cross the border with her three children as she runs from authorities and a drug-abusing, violent husband to whom she was married off at 15.

"After he was put in jail, soldiers started coming around at night," said Zulikhan, wearing sneakers in the freezing cold, her feet wrapped in cloth instead of socks.

"They would hold my daughter and say they would rip her tongue out."

Zulikhan said that Kadyrov's men had threatened to report her as a rebel.

"They beat me once, they looked for me everywhere," she said.

At the Brest train station, Chechen children silently play while their parents discuss their failed border trips. Many spend the night here after running out of money.

"Each of these children has a very sad story to tell," said Marina Hulia, a Polish teacher, who often travels to Brest to teach them some Polish and make their days a little less dreary.

"Their parents are under constant stress watching over their possessions, so the kids don't leave the station for months," said Hulia, who recently took 50 Chechen children to the zoo.

Asked what she wants to do in Poland, Zulikhan perked up.

"I've wanted to become a doctor since I was a child, but my childhood was taken from me," she said.

"They say in Poland you can't hit and abuse people. I don't want my children to fear that I will be killed."