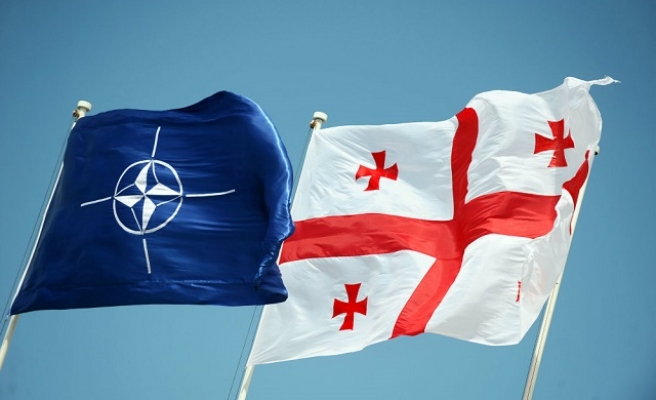 Seven years have passed since the 2008 Russia-Georgia War, and the Georgians are still seeking a normalization process and de-escalation in tension with Russia.

In a recent interview with Anadolu Agency to mark the seventh anniversary of the 2008 Russia-Georgia War and the 22nd anniversary of the 1992-93 War in Abkhazia, Georgian Ambassador to Turkey Irakli Koplatadze said that his country's main foreign policy agenda was now to join the NATO alliance.

"NATO membership remains a top priority of Georgia’s foreign and security policy agenda. We are optimistic that the Warsaw NATO Summit [in 2016] will positively evaluate the homework done by Georgian side within the substantive package granted to Georgia at the 2014 Wales Summit," Koplatadze said.

The Georgian envoy also said that Turkey, which was Georgia’s number one trade partner, also welcomed his country's EU and NATO aspirations.

Turkey supported the UN General Assembly resolution on the “Status of IDPs [internally displaced peoples] and Refugees from Abkhazia, Georgia and the Tskhinvali region/South Ossetia, Georgia” on June 3, 2015.

"We wish other big neighbors also to have the same constructive and friendly vision in regards of their neighbors as Turkey has. This would bring stability and prosperity to the region," Koplatadze said.

However, Russia does not approve of Georgia’s NATO and EU ambitions.

"Unfortunately, it is not easy to convince Russia that we want to join NATO not [because Georgia is] against any country but for ourselves; we want to join EU for the same reason; we want our country to be a better place to live in, not against somebody, but for our future generation," he added.

In early 1990s, Moscow responded to Georgia’s move to independence with alleged open military and economic support to separatist forces in the country’s two regions: Abkhazia and South Ossetia. The situation escalated into armed hostilities, resulting reportedly in large number of deaths and the displacement of hundreds of thousands of ethnic Georgians and other ethnicities from those regions.

In early August 2008, in proportion to Georgia’s growing European and Euro-Atlantic aspirations (revealed after the NATO Bucharest Summit), Russia had been intensifying its “aggressive policy” which culminated in massive large-scale military action against Georgia. Notably, later in 2011, then Russian President D. Medvedev made a statement that Russia’s military action was intended to counter Georgia’s NATO ambitions and thus Georgia’s sovereign choice to integrate into the Euro-Atlantic community.

"Moscow justified the invasion of Georgia with an absurd argument to protect its so-called citizens, who became such as a result of illegal ‘passportization policy’ -- granting of Russian passports to citizens of both regions," the envoy said.

"The five-day war resulted in the occupation of 20 percent of Georgian territories, 396 deaths and 1,721 severe injuries from the Georgian side, as well as brought a new wave of massive ethnic cleansing of the Georgian population from the South Ossetia. Up to 140,000 ethnic Georgians were forced to leave their homes and join the ranks of already existing IDPs," Koplatadze added.

On August 12, on behalf of EU, French President Nicolas Sarkozy successfully mediated a cease-fire between Georgia and Russia. With that agreement, Russia committed itself to withdraw its troops to positions prior to the war.

"Unfortunately, what we witnessed was not a withdrawal, but further building up of Russian military troops there instead. There are thousands of Russian soldiers dislocated at land bases, air bases, and naval bases in both tiny regions of South Ossetia and Abkhazia," Koplatadze said.

On August 26, 2008, Russia recognized the “so-called” independence of Abkhazia and South Ossetia to “legitimize its illegal military presence” on the ground. Military build-up was followed by building of civil infrastructures connecting both regions with Russia (highways and tunnels in South Ossetia; railways and naval routes in Abkhazia).

Koplatadze said that Russia's 60 kilometer-long barbed wires had already been built in the country and there were people whose houses were affected by the barbwire, and their farmlands, garden, cemeteries are on the other side.

"More than 3,000 people were detained because of these barbed wires," he added.

About Russian soldiers controlling some part of the Baku-Supsa Pipeline, Koplatadze said that the most recent installations took place in close proximity to the Tbilisi-Gori Highway on July 10.

"In total, 1650m segment of the British Petroleum-operated Baku-Supsa Oil Pipeline has fallen under the control of the Russian occupation forces," he said.

About the trilateral cooperation between Georgia, Azerbaijan and Turkey, he said that it was "on the rise".

"Today, Georgia’s tries its best to convince South Ossetian and Abkhazian brothers that there are better alternatives rather than assimilation with Russia, and these alternatives are democratic values and access to a good education, open market economy and free societies, freedom and progress, all benefits provided by the western civilization and the European community," the envoy said.

About Georgia getting the same attention as Ukraine when it comes to protecting territorial integrity, Koplatadze said that the country "enjoys the assistance that we [Georgia] have been getting from our western friends and allies".

"On August 12, 2008, we signed a six-point cease-fire agreement with Russia, brokered by EU, which committed Russia to withdraw its troops to positions prior to the war," he added.

However, Koplatadze also said that the Western reaction towards Russia seemed to be fading.

"Provided political pressure against Russia lasted longer, the crisis in Ukraine could have been avoided," he said.

Koplatadze was also asked about the Georgian diaspora in Turkey.

"Hundreds of thousands of Turkish citizens who have ethnic Georgian origin boost the brotherly relationship between Georgia and Turkey. They are very active in business, politics, culture and people-to-people contacts," the envoy said.

"About 1.7 million people from both sides are visiting each other without visas and passports. We really enjoy this unique relationship."

About Meskhetian Turks and Georgian government's "unwillingness" to send them back to their lands, Koplatadze said that Georgia had fulfilled its commitments to the Council of Europe.

"About 6,000 applications have been received; the status of the repatriate has been already granted to 1,533 Forcefully Displaced Persons [FDPs]; 418 of them have already obtained citizenship of Georgia," the envoy said.

"Based on the request of Turkey, we have extended terms of filling application to get the repatriate status twice," Koplatadze added. "The process of reviewing applications for obtaining the status of a repatriate and the citizenship of Georgia is underway."

Since 2011, six groups of repatriates visited Georgia and particularly, the region of Samtskhe-Javakheti under the “Go and See” project.

On September 12, 2014, the Georgian government approved a strategy for the repatriation of such displaced persons that sought the dignified return of repatriates and maintenance of their integration into society, the ambassador added.

Since the Meskhetians were forced to leave their Samtskhe-Javakheti region under Stalin in 1944, they want a road map for the repatriation and discussion of dual citizenship.

The Baku-Tbilisi-Ceyhan oil pipeline, the South Caucasus natural gas pipeline, and the ongoing project of Kars–Tbilisi–Baku railway pass through the Samtskhe-Javakheti region.