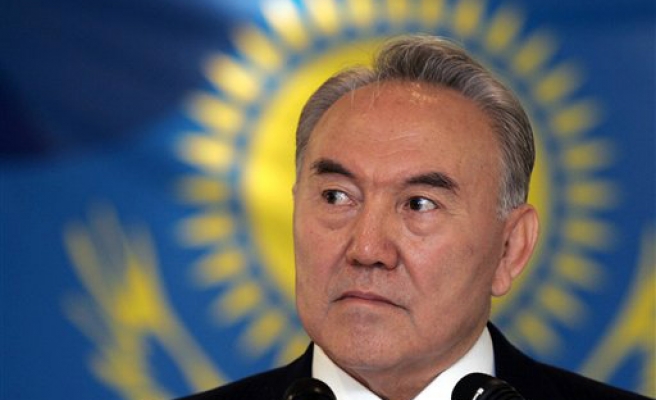 An influential organisation chaired by Kazakhstan's President Nursultan Nazarbayev has proposed holding an early presidential election this year, saying the veteran leader needs another term to steer his oil-rich state through economic crisis.

Nazarbayev, a 74-year-old former steelworker, has ruled his steppe nation of 17 million with a strong hand since 1989 when he became the head of the local Communist Party.

He keeps a tight lid on dissent and faces no real challenge from the small opposition. His swift re-election in a snap vote would end continued speculation about his possible successor, a question closely watched by investors in Kazakhstan.

"It is crucial to strengthen the economy and ensure the continuity of the current policy by holding an early election," the Assembly of the People of Kazakhstan, a constitutional body representing Kazakhstan's ethnic groups and headed by Nazarbayev, said in a statement issued late on Saturday.

The president's office could not be reached for comment.

Nazarbayev was elected by almost 96 percent of votes in 2011 and his five-year term ends only in late 2016.

But the assembly, which he calls "an efficient tool of our fledgling democracy", said the nation could not hold both a parliamentary and a presidential election next year, at a time a new crisis starts to bite.

Kazakhstan's economy is hit by low prices for its vital oil and metal exports, and by a crisis already raging in its sanctions-hit neighbour Russia.

"The president of the country, Nursultan Nazarbayev, must be handed a new mandate of nationwide confidence to make sure the country successfully passes this period of global challenges," the assembly said.

Under the constitution, the assembly has nine deputies in the 107-member lower chamber of parliament, which is dominated by Nazarbayev's Nur Otan ruling party. It said its faction would make an official motion to hold an early election.

Nazarbayev, who is officially titled "Leader of the Nation" and is allowed by law to be elected as many times as he wants, has been repeatedly criticised by the West and human rights bodies for his authoritarian methods.

Kazakhstan, a close political and trade ally of Russia, has never held an election judged to be free and fair by the West.