Nationwide ceremonies in Azerbaijan marked the 24th anniversary of civilian deaths during battle for strategic town in Nagorno-Karabakh region. 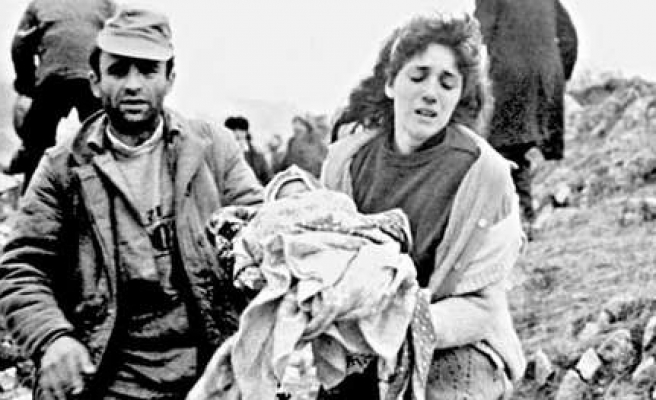 February 25th marks the 24th anniversary of one of the bloodiest and most controversial incidents of the war between Armenia and Azerbaijan for control of the Nagorno-Karabakh region, the legacy of which still poisons relations between the two neighbors today.

On February 25, 1992, Armenian militia attempted to seize Khojaly, a strategic town in Nagorno-Karabakh, since it had the region’s only airport.

Armenian fighters wanted a transport link with the Republic of Armenia other than mountainous Lachin corridor.

Assaults during the winter of 1992 forced many Azeri civilians to flee to safer areas. Assisted by the Russian 366th Regiment, Armenian fighters on February 25 moved to capture Khojaly, a move which resulted in the remaining civilians and a few lingering Azeri fighters to flee towards Azerbaijan.

"As they approached the border with Azerbaijan, the civilians came across an Armenian military post and were cruelly fired upon. At least 161 people are known to have been murdered in this incident," Human Rights Watch said on its later report into what became known as the "Khojaly massacre."

Armenia’s invasion of Azerbaijan’s Nagorno-Karabakh territory began in 1988 with minor conflicts, but it evolved into a full-scale war in 1992.

At the end of the war in 1994, Armenian and Azeri delegations held talks over the status of Nagorno-Karabakh under the supervision of the Organization for Security and Co-operation in Europe's Minsk Group.

Those talks have so far produced no results and sporadic clashes still take place between Armenian and Azeri forces.

Currently, Nagorno-Karabakh and seven adjacent districts, which account for more than 20 percent of Azerbaijani territory, are still under Armenian occupation.

During his three-day visit to Azerbaijan, Foreign Minister Cavusoglu was received by President Aliyev and Prime Minister Artur Rasizade separately.

According to diplomatic sources, energy and transportation cooperation between the two countries were the main topics of discussion.