Saying they will continue pursuing a consistent policy on the development of democracy, Aliyev stresses they will fight even more rigorously against corruption and bribery. 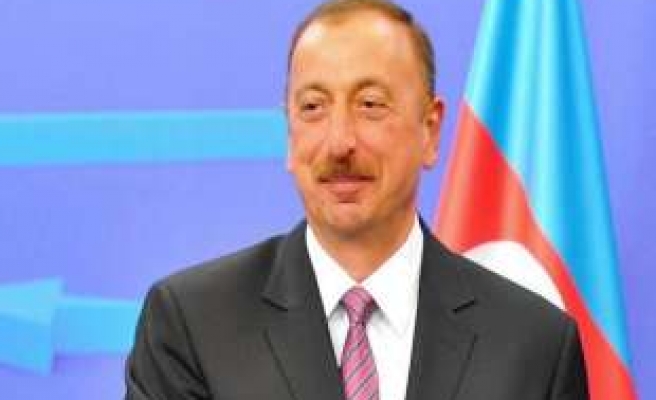 Azerbaijani President Ilham Aliyev, having won a third term in office after garnering more than 80% of the votes in Wednesday's election, assured the people of Azerbaijan that he would continue to properly serve his nation and to always defend the national interests of Azerbaijan.

Addressing the people of Azerbaijan over the presidential election's preliminary results, Aliyev noted that the election, in which the Azerbaijani people demonstrated their will in a free and transparent manner, is a triumph of democracy, and that Azerbaijan will continue to thrive as a democratic state.

Stressing that Azerbaijan is a free country where people are guaranteed the freedoms of speech, press, and conscience, as well as political freedoms, Aliyev called Azerbaijan a center of multiculturalism in the world with representatives of all ethnicities and religions living in peace and friendship like one family.

Stating that there is development and progress in all directions in Azerbaijan, Aliyev indicated Azerbaijan has become a very important country in terms of international affairs, referring to the country becoming a member of the UN Security Council two years ago and currently presiding over that organization.

Aliyev also referred to the great strides Azerbaijan has made in the economic sphere in the last decade, saying their economy has grown 3.4 times, while the poverty rate has dropped almost 10 times as a result of the country's consistent economic and social policy.

Stating that Azerbaijan has managed to greatly enhance its economic potential, allowing them to protect their interests properly in the international arena, Aliyev noted that Azerbaijan plays a role not only in regional but also global affairs, and that their role will gradually increase.

Aliyev stressed energy policy as an issue of great importance for the entire world, stating that no initiative, be it political or economic, can be implemented in the region without the consent of Azerbaijan.

Casting these as the achievements of independent Azerbaijan, Aliyev declared his belief that the votes cast for him in this election are votes for independence, freedom and a happy future.

"The confidence shown in me in this landslide election is, on the one hand, an assessment of the work done and, on the other, an expression of people’s intent and demands related to the further development of Azerbaijan. We look to the future with great hopes and great optimism. The experience of the last 10 years reinforces this confidence, because we have made tremendous progress in all areas in the last 10 years. Today, Azerbaijan is a strong and growing state conducting an independent policy and looking to the future with great optimism. Such optimism is perfectly justified," Aliyev stated.

Saying they will continue pursuing a consistent policy on the development of democracy, Aliyev emphasized they will fight even more rigorously against corruption and bribery.

Aliyev also referred to the importance they attach to social policies, saying that Azerbaijan is a welfare state and their policies center on Azerbaijan's citizens and their concerns, problems, security and happiness.

"Azerbaijan will continue to steadily develop. The Azerbaijani state and I, as president, will defend the national interests of Azerbaijan and protect the well-being of our people. I want to thank you again for the great support you have given me over the past 10 years. I want to assure you that I will make every effort to ensure the welfare of our people and to strengthen our state. We will achieve great victories together. Long live the independent Republic of Azerbaijan!" Aliyev concluded.