Russia and the self-proclaimed Republic of Abkhazia have signed a strategic alliance partnership agreement that includes a collective defense pact. 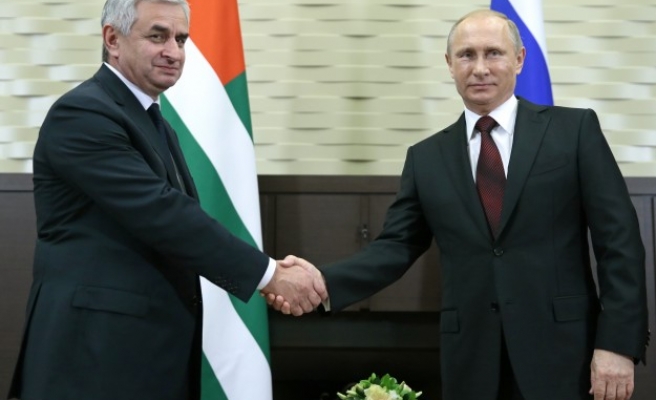 NATO has criticized Russia and Georgia's breakaway region of Abkhazia for signing a treaty with Moscow which aims to develop a common defense and security space in the region.

The criticism came on Tuesday a day after Russia’s President Vladimir Putin signed the agreement with Abkhazian President Raul Khadzhimba in the Russian coastal city of Sochi, allowing the region to coordinate its foreign, economic, social and defense policies with Moscow.

NATO said in a statement: ''NATO fully supports the sovereignty and territorial integrity of Georgia within its internationally recognized borders.

"This so-called treaty does not contribute to a peaceful and lasting settlement of the situation in Georgia."

''On the contrary, it violates Georgia’s sovereignty and territorial integrity and blatantly contradicts the principles of international law, OSCE principles and Russia’s international commitments," it added.

However, the Russian Presidency said on its website: ''The agreement provides for complete freedom of movement on the Russia-Abkhazia state border, taking into account restrictions imposed for security reasons."

Russia will also grant 5 billion rubles ($111.4 million) to Abkhazia under the deal.

The treaty angered the Georgian government which accused Moscow of seeking to annex the territory.

The Foreign Ministry of Georgia said in a statement: "The document also envisages the de-facto abolishment of the Georgian-Russian border along its Abkhaz section and the reinforcement of the occupation line.

"Any attempt to sign a treaty with the region is therefore a flagrant violation of international law and constitutes an illegal action devoid of legal consequences."

The treaty comes six years after a five-day war took place between Russia and Georgia over Abkhazia and the twin region of South Ossetia.