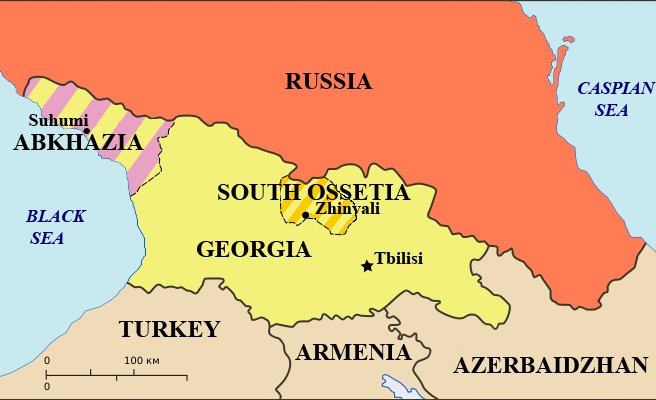 Georgia's breakaway region of South Ossetia has begun preparations for a referendum on joining Russia but the Kremlin poured cold water on the idea Tuesday.

The Georgian regions of South Ossetia and Abkhazia broke away after civil wars in the 1990s that followed the break-up of the Soviet Union.

Moscow officially recognised their independence after fighting a five-day war with Georgia in 2008 and has been supporting the two regions financially.

"Yesterday the president initiated the procedure to hold a referendum," a spokeswoman for regional leader Leonid Tibilov told AFP.

The idea of plebiscite was raised at a Monday meeting between Tibilov and President Vladimir Putin's aide, Vladislav Surkov, in South Ossetia, the regional administration said.

"We should make our historic choice and reunite with brotherly Russia to ensure the safety and prosperity of our republic and our people for centuries to come," Tibilov was quoted as saying in a statement.

Tibilov's spokeswoman, Tamara Kelekhsayeva, said the reaction of Putin's aide was "positive", adding she believed that most of the region's 50,000 people would be in favour of joining Russia.

But on Tuesday the Kremlin -- apparently mindful of Western criticism and the possible implications of such a move --  denied such a proposal had been made at the meeting with Surkov.

"It's been known for a long time that many in South Ossetia are in favour of integration with Russia," Kremlin spokesman Dmitry Peskov told reporters.

"And as far as we understand, this is what Mr Tibilov was speaking about."

The breakaway statelet has already voted on its future twice.

In 1992, a majority voted in favour of joining Russia, while a plebescite in 2006 saw most support the idea of remaining independent.

Last March, Russia signed a wide-ranging alliance agreement with South Ossetia that further cemented its control over the breakaway territory.

Under the controversial pact, Russia became responsible for defending the self-declared republic.

The treaty drew criticism from Georgia and the West, with both NATO and the United States saying they would not recognise it.

The West slapped sanctions against Moscow for annexing the peninsula of Crimea from Ukraine in 2014 and supporting insurgents in the self-proclaimed republics of the country's east.