The first memorial in Georgia for Meskhetian Turks after 70 years

For the first time in 70 years, the Ahiskan Turks were able to hold a memorial service in Georgia 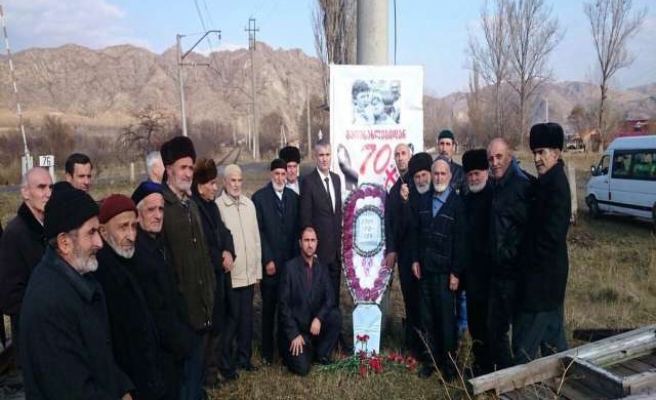 The Ahiska Turks (Meskhetian Turks) for the first time in 70 years have organised a memorial service at the train station in Ahiska, Georgia from where they were driven to exile.

With the signing of an agreement by USSR President Joseph Stalin in 1944, the Ahiska Turks were rounded up on trains and exiled from their homeland. The ceremony was attended by many people from different backgrounds as well as the Ahiska Turks, many now elderly and witnessed the deportation onto rail cars.

On the 15the of November, Joseph Stalin had signed a deportation order as part of the State Defence Committee ordering 86,000 Turkish and Muslim Ahiskans out of the USSR with 40,000 to Kazakistan,  30,000 to Kirgiztan, and 16,000 to Uzbekistan. By all accounts, during that time there were a number of them in the military and at the same there was an inability to do a proper census, leading many to think the number of those who were deported was much higher than the official records. Independent sources say that as many as 20,000 Ahiska Turks perished and died from hunger, thirst and cold directly as a result of the conditions of the deportations.

Today there are more than 300,000 Ahiska Turks who live in Kazakhistan, Russia, Azerbeycan, Turkey, Kirgiztain, Ozbekistan and in the Ukraine.