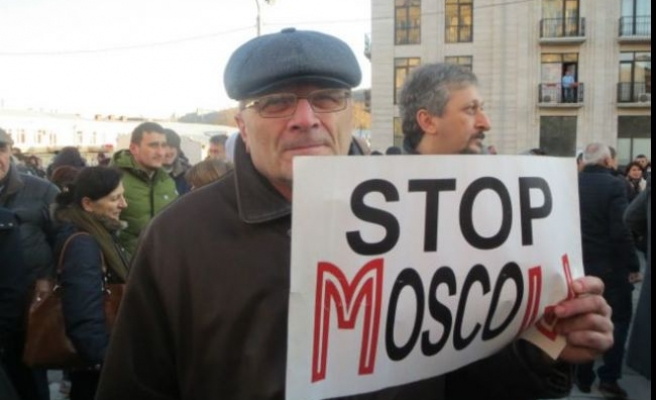 Holding Georgian flags and chanting "No to Gazprom!" protesters formed a six-kilometre human chain stretching across the city, from the Russian embassy building to the government headquarters.

The protest was organised by former president Mikheil Saakashvili's staunchly pro-Western United National Movement party (UNM), which has long accused the Kremlin of using Gazprom as a political weapon in a bid to prevent Georgia from forging closer ties with the West.

"The Georgian society will not allow this government to undermine the country's energy security," a senior UNM lawmaker, David Bakradze, told journalists.

On Saturday, Georgia's energy ministry said that it had abandoned its initial plan to buy natural gas from Russia after it had secured a deal with Azerbaijan to purchase additional volumes of gas.

Bakradze claimed the decision was made as result of UNM's pressure on the authorities, adding that "the final goal will only be achieved when we firmly ascertain that we forced the government to say no to Georgia's return back to the influence of Gazprom."

Another UNM leader, Giga Bokeria, said: "We must be vigilant so that this government doesn't do any more harm to Georgia's national interests -- until Georgians oust it from power in October parliamentary elections."

Tbilisi has claimed the explosions were staged by Russian secret services to force the country into selling its pipelines to the Gazprom.

Moscow has denied the claims, blaming the explosions on North Caucasian "terrorist groups."

The Baku-Tbilisi-Ceyhan pipeline and the South Caucasus Pipeline that carry Caspian Sea oil and gas to the Western Europe via Georgia and Turkey -- bypassing Russia -- are seen as vital for reducing Europe's dependence on Russian energy supplies.

Russia and Georgia fought a war in August 2008 and many in Georgia fear the country's former imperial master is determined to eventually retake control of it.

Diplomatic relations between Georgia and Russia have been virtually non-existent since the brief but bloody conflict.

At the Sunday's rally many held Ukrainian flags and portraits of the female Ukrainian military pilot Nadiya Savchenko who is jailed in Russia awaiting a verdict in her controversial murder trial.

Georgian President Giorgi Margvelashvili has said that the failure of the international community to punish Russia for its 2008 invasion of Georgia has let Moscow think it can get away with destabilising Ukraine.