14 parties and more than 2,000 candidates battle for seats in the 120-member legislature 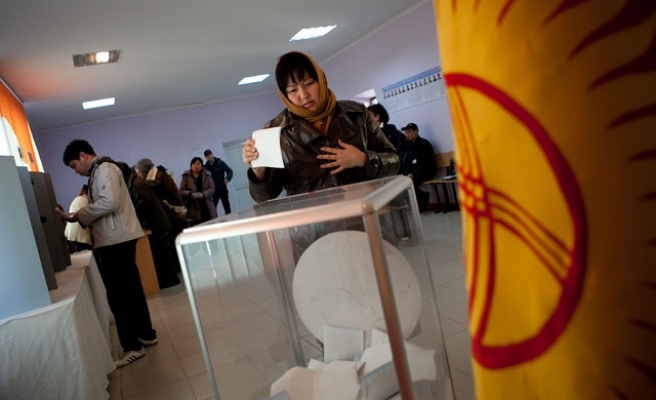 Ex-Soviet Kyrgyzstan headed to the polls on Sunday for a hotly-contested parliamentary vote, but the results are unlikely to change the country's firmly pro-Russian trajectory.

Polling stations across the majority-Muslim Central Asian country of six million opened at 0200 GMT, the election commission said, as 14 parties and more than 2,000 candidates battle for seats in the 120-member legislature.

The Social Democratic Party of Kyrgyzstan (SDPK), affiliated to current President Almazbek Atambayev, is expected to do well in the poll, but can only take a maximum of 65 seats due to a stipulation in the country's constitution.

Other parties tipped for strong showings include Ata-Meken, Bir Bol and Respublika-Ata-Jurt, all of whom feature former prime ministers on their party lists and are openly loyal to Moscow.

In the capital Bishkek, voters appeared to be supporting a range of parties, with several saying they were voting for SDPK.

"It is the strongest party," said Yulia Zakharchenko, a 36-year old nurse preparing to cast her vote in a school converted into a polling station.

"I don't expect much to change though. The parliament will reconvene and it will be five more years of intrigue and corruption," she told AFP.

"For the last 24 years since independence, the parliamentary elite has been one and the same. It is time for new players," Djangaracheva told AFP.

But political analyst Emil Juraev of the American University of Central Asia fears there are likely to be "new parties but old faces" in the next parliament.

"It would be false to say that a culture of parliamentarianism has arrived in Kyrgyzstan. The type and quality of candidate remains similar to the last election," he told AFP.

Occasionally referred to as an "island of democracy" in authoritarian Central Asia, Kyrgyzstan has the region's freest press and civil society and once hosted US and Russian military bases simultaneously.

But the lease on Washington's Afghanistan-linked Transit Center was not renewed when it expired in 2014, and relations have grown tense after Kyrgyzstan terminated a bilateral cooperation accord dating back to 1993 this summer.

That decision, which threatens the provision of millions of dollars of US assistance to the country annually, came after the US State Department awarded a prestigious human rights prize to an ethnic minority activist jailed in 2010.

Atambayev described the award as an "intentional provocation" over five years after a bloody revolution and ethnic violence in the republic left hundreds dead.

These risks are "exacerbated by leadership failure to address major economic and political problems, including corruption and excessive Kyrgyz nationalism," the report added.

The election race has featured controversy as parties trade accusations of vote buying and other underhanded campaigning tactics.

On Wednesday a court reaffirmed the CEC's exclusion of a key nationalist candidate from the Respublika Ata-Jurt party after a rival candidate accused him of assault.

Kamchibek Tashiyev, who served for two years as emergency situations minister in the regime ousted by the 2010 revolution, has denied the accusations and asked his supporters not to stage protests before the vote.

Nearly 800 election monitors from 47 organisations and 57 countries will watch the ballot with an OSCE-backed mission sending 353 observers.

Sunday's election is the first time citizens of Kyrgyzstan have been required to submit biometric data to cast votes, fuelling fears of teething problems at polling stations grappling with the new technology.

The new government measure has effectively sidelined hundreds of thousands of Kyrgyz migrants working in Russia and other citizens who failed to meet the September 19 deadline for submitting their data.