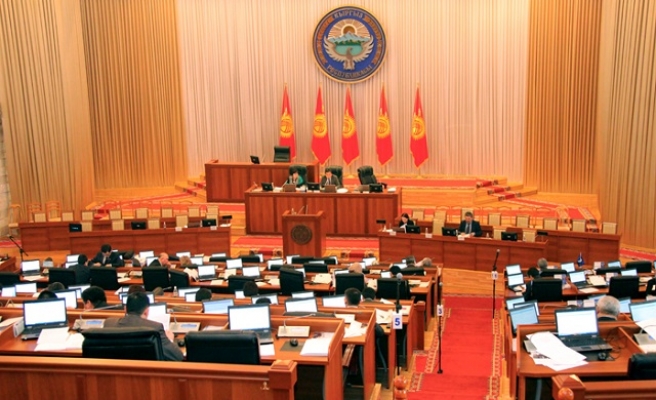 Kyrgyzstan’s Social Democratic Party (SDPK) has won the country's parliamentary elections and will be tasked with forming a coalition government.

Six political parties passed the threshold to enter the 120-member unicameral legislature, which is known as the Supreme Council.

Abdraimov said 59 percent of registered voters cast their ballots in the elections.

He said the elections were held in a "calm atmosphere."

Abdraimov said there are still some 30,000 votes -- many of those coming from the 36 polling places opened abroad -- that need to be counted.

According to the preliminary results, the Social Democrats will have 38 seats in parliament, Respublika Ata-Jurt will get 28, the Kyrgyzstan party will have 18 seats, Onuguu-Progress had 13 seats, Bir Bol will get 12, and Ata-Meken will have 11 seats.

RFE/RL correspondent Bruce Pannier said from Bishkek that it was a "surprise" that six parties will be in parliament, including two new ones -- Onuguu-Progress and Bir Bol.

He added that the current coalition partner Ata-Meken (Fatherland) had a very disappointing result.

RFE/RL’s Kyrgyz Service reported long lines outside some polling stations, with many voters saying they had to wait two to three hours before they could cast their ballots.

Nearly 2.7 million voters were registered to vote after receiving biometric ID cards -- a first for Central Asia -- which, with the help of a scanner, was used to identify each voter by his or her fingerprint in a bid to stamp out voter fraud.

Some minor technical problems were reported with the new voting system.

The Interior Ministry said there were some complaints about parties trying to buy votes, adding that authorities would investigate such allegations.

The coalition For Democracy and Civil Society observed the election process in some 500 polling stations throughout the country.

Its leader, Dinara Oshurahunova, told RFE/RL’s Kyrgyz Service that the organization had not received reports about “very serious irregularities.”

In one polling station in Naryn, she said, there was no official stamp on the ballots. And in Jalal-Abad, one young lady was caught with a bunch of IDs belonging to students.

Speaking to reporters after casting his ballot, President Almazbek Atambaev urged voters "to choose stability" in Kyrgyzstan's third democratic election since a 2010 revolution that ousted its authoritarian leader.

"For me, it's important to have a solid footing in parliament," he said. "I hope today the Social Democrats will get more than 26 seats," he said, referring to the party's result in the 2010 elections.

The Prosecutor-General's Office took steps to dissuade fraud by announcing last week that anyone found guilty of attempting to bribe voters will be fined and could be punished by up to two years in prison.

Atambaev -- who under Kyrgyz law had to drop out of the SDPK when he was elected president -- had been criticized for making public appearances and speaking engagements seen as campaigning for his former party ahead of the election.

The party, likewise, placed its billboards around the country announcing: "Think about your country, let's support the president. The Social Democratic Party."

Several rights activists and NGOs complained to the CEC about the connections between the president and the party.

There have also been media reports about local officials attempting to force teachers, doctors, students, and government workers to vote for the Social Democrats.

These parliamentary elections are the third elections since Kurmanbek Bakiev was forced by demonstrators to flee the presidential office five years ago.

The previous two votes in Kyrgyzstan -- parliamentary elections in 2010 and a presidential election the following year -- were deemed free and fair by international monitoring groups, something that has not occurred in any other Central Asian country.

All of the main parties in the elections hold pro-Russian positions, mirroring the recent shift by Atambaev and his government toward Moscow and away from the United States that began with the closure of the U.S.-run Manas Air Base in 2014.

This trend was highlighted earlier this year by Kyrgyzstan's entry into the Russian-led Eurasian Economic Union and Bishkek's rescinding of its intergovernmental cooperation agreement with the United States that was first signed in 1993.

Such actions have been accompanied by noticeably anti-American comments from Atambaev.