Construction on the mega dam that is in Rogun, Tajikstan has commenced which will supply electricity to Afghanistan as well as Pakistan 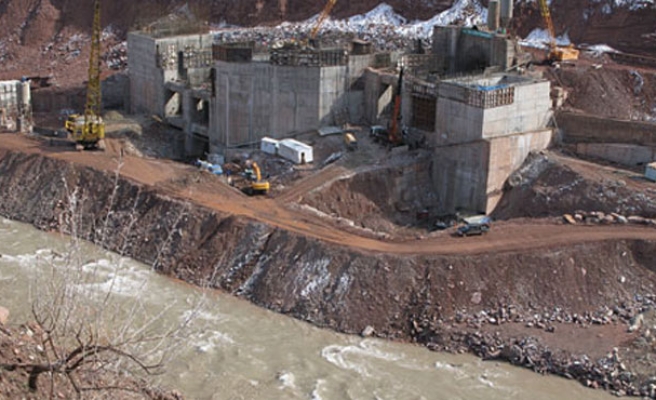 The high-profile ceremony was held in Rogun some 100 kilometres from the capital Dushanbe and saw veteran President Emomali Rakhmon spend an hour-and-a-half behind the wheel of a bulldozer pushing soil to block the Vakhsh river.

According to his press service Rakhmon, 64, "poured gravel onto the bed of the (redirected) River Vakhsh, marking the beginning of construction of the Rogun hydroelectric plant vital for the people of Tajikistan."

Speaking at the ceremony Rakhmon called the start of construction "the achievement of the year."

He also promised states in the region worried about the project that Tajikistan would "never leave its neighbours without water."

The dam, initially conceived by Moscow in the 1970s, has been severely criticised by Uzbekistan.

Saturday's ceremony came a day after most of Tajikistan was plunged into darkness for several hours following an accident at the Nurek hydropower plant that supplies the bulk of the country's electricity.

In July, Tajikistan announced that Italian company Salini Impregilo had won a $3.9 billion contract to build the Rogun dam, which at 335 metres (1,099 feet) would be the world's tallest.

In addition to helping the country achieve energy independence -- planned shutoffs affect many parts of the country during the winter -- Tajikistan believes Rogun will transform the country into a regional hub for electricity exports.

Tajikistan is a key node in the US-backed CASA-1000 project that aims to increase supplies of electricity from the region to South Asian countries Afghanistan and Pakistan.