On the fateful day of July 15, 1974, at around 8.15am, the EOKA junta emerged in Russian T-34 tank columns in the streets of Lefkosa (Nicosia) as they headed towards the presidential palace to oust President Archibishop Makarios. About 650 officers in the 15,000-strong junta were professional soldiers from Greece. 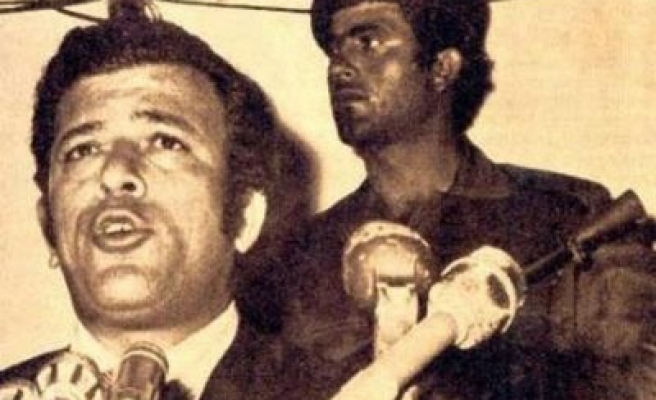 40 years ago today, on July 15, 1974, inter-communal violence erupted in Cyprus amid a Greek Cypriot attempt to annex the Mediterranean island with Greece after a coup by the right-wing Greek military junta. This put Turkish Cypriots, who had already been forced into enclaves, under threat.

The Turkish Cypriots had previously had to deal with eleven years of oppression at the hands of the Greek Cypriot authorities, after President Archbishop Makarios forced them out of the government in 1963, in breach of the 1960 Cyprus constitution, which gave Turkey, Greece and the UK guarantor status on the island.

Shortly after the Turkish Cypriots were ejected from all official positions, Cyprus-born anti-communist Greek military general Georgios Grivas arrived at the island in 1964 to lead EOKA - a group he had originally set up in 1954 to fight against the British occupation - to complete the struggle to achieve the Greek Cypriot dream of Enosis - union with Greece.

Grivas then organized a number of attacks on Turkish Cypriot civillians, assaulting two small villages on the critical Larnaca, Limassol, Nicosia intersection. He also killed a number of Turkish Cypriot resistance fighters in Kofinou and Agios Theodoros, prompting an ultimatum from Turkey.

He was then recalled back to Greece in 1968, only to return three years later in 1971, but this time with a different agenda. Grivas had come at odds with Makarios, who he felt had wavered from the Enosis dream.

On his return, Grivas set up EOKA-B and began attacking the Cypriot government, even attempting to assassinate Makarios. Grivas died of heart failure in January 1974, but EOKA-B continued to mount pressure on the government and had become increasing under the direct control and influence of the military junta in Athens.

On the fateful day of July 15, 1974, at around 8.15am, the EOKA junta emerged in Russian T-34 tank columns in the streets of Lefkosa (Nicosia) as they headed towards the presidential palace to oust President Archibishop Makarios. About 650 officers in the 15,000-strong junta were professional soldiers from Greece.

Gunfire quickly broke out, with clashes killing 98 people that day, and Makarios was forced to evacuate the palace, fleeing to Paphos, from which he quickly boarded a British helicopter which took him to RAF Akrotiri on the sovereign bases, and later escaped by plane to Malta and then to London.

That afternoon, Nikos Sampson was named president. The new regime immediately took over radio stations and declared that Makarios had been killed, but of course Makarios soon refuted the claims when he arrived in London.

Turkey wasted no time in raising the alarm, demading the immediate removal of Nikos Sampson, the withdrawal of 650 Greek officers from the Cypriot National Guard, the admission of Turkish troops to protect their population, equal rights for both populations, and access to the sea from the northern coast for Turkish Cypriots.

Turkey also appealed to the UK, as a co-guarantor of peace according to the constitution, to enter into a joint venture to return Cyprus to its neutral status. However, Britain declined this offer, and refused to let Turkey use its bases on Cyprus as part of the operation.

Two years later, Sampson was sentenced to twenty years in jail, the first three of which he spent in Cyprus before being allowed to go to France for medical reasons. He returned to Cyprus in 1990 to complete his sentence but was released in 1993. He died in 2001 at the age of 65.

Due to the threat of Turkey the CyGov instituted the National Guard. Cyprus being new there were not enough officers. Cyprus requested Greece, then democratic, to send officers to man the National Guard. When the military took over Greece n 1967, Cyprus found itself with unwanted Greek officers in Cyprus. These officers orchestrated EOKA B with Grivas to attack the CyGov. Makarios sent a letter to Greece asking them to remove the officers. The Greek Junta responded in July 15 1974...

At first I stumbled on your website via a link from Twitter excited at the list of stories covered - I am saddened by the blatantly bias tone of the articles and dismayed that my fellow kinsmen should perpetuate the propaganda that makes us so hated around the world. I wish I'd never found this. Sorry ;-(