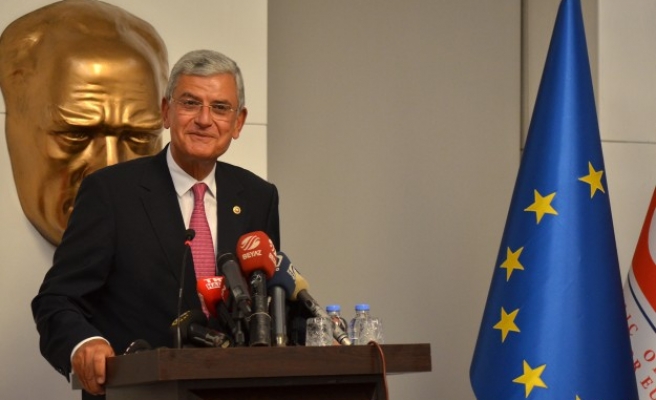 Turkey's ongoing accession to the European Union has continued longer than that of any other country, Turkey's Chief EU Negotiator Volkan Bozkir has said during a trip to Sweden.

Bozkir's comments came in a press conference in Stockholm, on Friday on his last day of a two-day visit to meet Swedish officials.

He told reporters: ''Turkey continuing with the 50-year-long process shows its desire to become a member, how tolerant it is and how determined it is.

"Fifty years is the most beautiful expression of this.''

He said Turkey's accession was blocked by the Cyprus issue alone.

Countries such as Latvia, Luxembourg and Sweden could help open Turkey’s frozen "chapters" (on EU accession) he said, adding: ''However, Germany could solve the issue directly if it wanted to."

Parts of Turkey's EU accession procedure - which comprises introducing reforms in economic, political, judicial and other areas under so-called "chapters" - including Chapter 23 on Judiciary and Fundamental Rights and Chapter 24 on Justice, Freedom and Security, are still politically blocked by the Greek Cypriot administration despite the EU Commission and Parliament having called for them to be opened.

Bozkir said: ''Countries hiding behind the Cyprus issue need to start working on this.

''The Cyprus issue, by continuing for 50 years, is an embarrassment for world peace, for the EU, for the U.S. and for NATO.''

Negotiations between Turkish and Greek-Cypriots resumed after a two-year pause in February 2013 after the previous round collapsed partly because of the Eurozone debt crisis.

However, the Greek Cypriot administration suspended the most recent talks on Oct. 7 after Turkey sent a ship to explore for oil and gas off the coast of the island.

Bozkir also met Sweden’s Minister of Housing and Development, Mehmet Kaplan, who is of Turkish origin, during his visit.