"On Cyprus, things can be so close yet so far. A word can make all the difference," said Christos Stylianides, spokesman for the Greek Cypriot government. 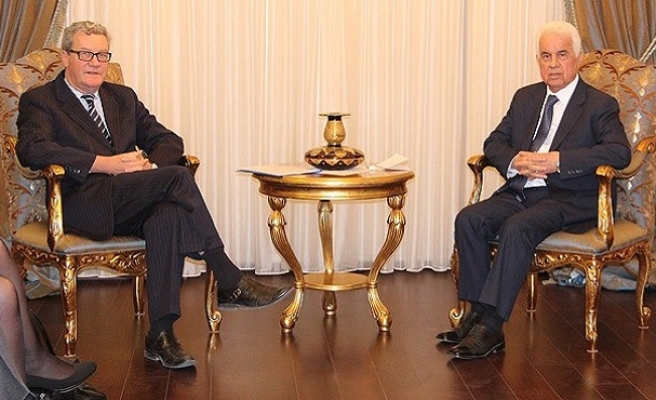 The Greek Cypriot administration said on Wednesday it was close to reviving stalled peace talks between the island's Greek and Turkish communities who have been locked in a festering, decades-old conflict.

The United Nations has been toiling for months on the wording of a 'joint statement' to restart negotiations between the island's two dominant groups that broke off in mid-2012, which was released today.

The consultations were in a "delicate phase", said Christos Stylianides, spokesman for the Greek Cypriot government, declining to be more specific. "On Cyprus, things can be so close yet so far. A word can make all the difference."

The island of Cyprus has been divided since 1974 when Turkey exercized its constitutional right as a guarantor by conducting a military operation following a coup by far-right Greek Cypriot extremist group EOKA.

As a safeguard, Turkish Cypriots living in the south of the island fled north where Turkey's troops had based their soldiers. Greek Cypriots in the north fled south.

After 9 years of failed peace talks, thr Turkish Cypriots declared the independence of the Turkish Republic of Northern Cyprus in 1983, which to this day has only been recognized by Turkey.

Again hopes for peace were dashed when Greek Cypriots voted against the 2004 Annan plan in a referendum to unite the island. Even though Turkish Cypriots voted for it, the European Union only accepted the recognized Greek Cypriot administration into the EU, while the TRNC remained unrecognized.

The conflict has come into sharper focus since the discovery, first by Israel and then by Cyprus, of vast deposits of natural gas in the eastern Mediterranean.

Turkey, which lies north of Cyprus, contests the island's attempts to tap its offshore wealth. Cyprus says it is within its rights.

Underscoring tensions, a Turkish warship ordered a Norwegian research ship out of territory south of Cyprus on February 1, saying it was its own maritime zone.

Both sides released the much awaited 'joint statement' today, detailing seven points that will be the basis of renewed peace negotiations. A summary of the statement reads as follows:

1. The status quo is unacceptable and its prolongation will have negative consequences for the Greek Cypriots and Turkish Cypriots. The leaders affirmed that a settlement would have a positive impact on the entire region, while first and foremost benefiting Turkish Cypriots and Greek Cypriots, respecting democratic principles, human rights and fundamental freedoms as well as each other’s distinct identity and integrity and ensuring their common future in a united Cyprus within the European Union.

2. The leaders expressed their determination to resume structured negotiations in a results-oriented manner. All unresolved core issues will be on the table and will be discussed interdependently. The leaders will aim to reach a settlement as soon as possible and hold separate simultaneous referenda thereafter.

3. The settlement will be based on a bi-communal, bi-zonal federation with political equality as set out in the relevant Security Council Resolutions and the High Level Agreements. The united Cyprus, as a member of the United Nations and of the European Union, shall have a single, international legal personality and a single sovereignty which is defined as the sovereignty which is enjoyed by all members States of the United Nations, under the UN Charter and which emanates equally from Greek Cypriots and Turkish Cypriots. There will be a single united Cyprus citizenship, regulated by federal law. All citizens of the United Cyprus shall also be citizens of either the Greek-Cypriot constituent state or the Turkish-Cypriot constituent state. This status shall be internal and shall complement and not substitute in any way the united Cyprus citizenship.

4. The united Cyprus federation shall result from the settlement following the settlement’s approval by separate simultaneous referenda. The federal constitution shall prescribe that the united Cyprus federation shall be composed of two constituent states of equal status. The bi-zonal, bi-communal nature of the federation and the principles upon which the EU is founded will be safeguarded and respected throughout the island. The Federal constitution shall be the supreme law of the land and will be binding on all the federation’s authorities and on the constituent states. Union in whole or in part with any other country or any form of partition or secession or any other unilateral change to the state of affairs will be prohibited.

6. The appointed representatives are fully empowered to discuss any issue at any time and should enjoy parallel access to all stakeholders and interested parties in the process, as needed. The leaders of the two communities will meet as often as needed. They retain the ultimate decision-making power. Only an agreement freely reached by the leaders may be put to separate simultaneous referenda. Any kind of arbitration is excluded.

7. The sides will seek to create a positive atmosphere to ensure the talks succeed. They commit to avoid blame games or other negative public comments on the negotiations. They also commit to efforts to implement confidence building measures that will provide dynamic impetus to the prospect for a united Cyprus.