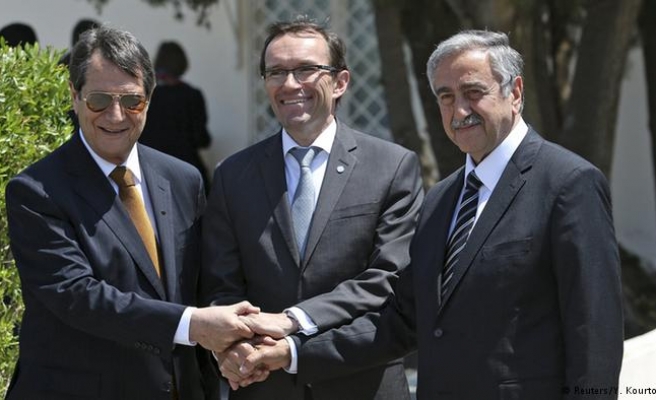 Greek and Turkish Cypriot leaders agreed Monday to step up their UN-brokered peace talks aiming within months to break a decades-old deadlock in efforts to reunify the Mediterranean island.

"The leaders believe that the coming months will be critical for the process," UN envoy Espen Barth Eide said following the latest meeting between the rival leaders of the divided island.

They would "increase the frequency of their meetings in the coming months" and had stressed "their commitment to work tirelessly to reach a comprehensive settlement as soon as possible".

He said the leaders would next meet on October 12 and October 30, before increasing the number of face-to-face sessions held in the UN-patrolled buffer zone in Nicosia.

The envoy did not give specifics.

Anastasiades and Akinci on Monday discussed the state of play in the peace process four months after the UN-backed process resumed with the full support of the international community.

"While encouraged by the progress being made, the leaders recognise the hard work that lies ahead," said Eide.

The leaders are working on a formula to resolve the issues of property and territorial adjustment that would unlock the key for a peace accord creating a united, federal Cyprus.

Territorial adjustments and property compensation are two of the most complex and divisive issues and the reason why numerous previous attempts at a settlement have failed.

Without a compromise on both matters a solution will be tough for the leaders to sell to their respective communities. Any peace accord must be ratified by Cypriots at the ballot box.

Allowing as many Cypriots to return home as possible while adequately compensating those who cannot would improve the prospects of a settlement.

Tens of thousands were displaced following the 1974 Turkish invasion, including a population exchange that effectively split the island between a Turkish Cypriot north and a Greek Cypriot south.

Analysts believe the good chemistry between Anastasiades and Akinci can create a climate of trust needed for an elusive peace accord.

Anastasiades acknowledged after Monday’s session that there were still problems to be ironed out.

"However, we are determined to work intensively, and with goodwill, to find an acceptable agreement for both communities," he told reporters.

Long-stalled UN-brokered peace talks -- seen as the last best chance to reunify Cyprus after four decades of division -– were launched on May 15.

Cyprus has been divided since 1974 when Turkish troops occupied its northern third in response to an Athens-inspired coup seeking union with Greece.