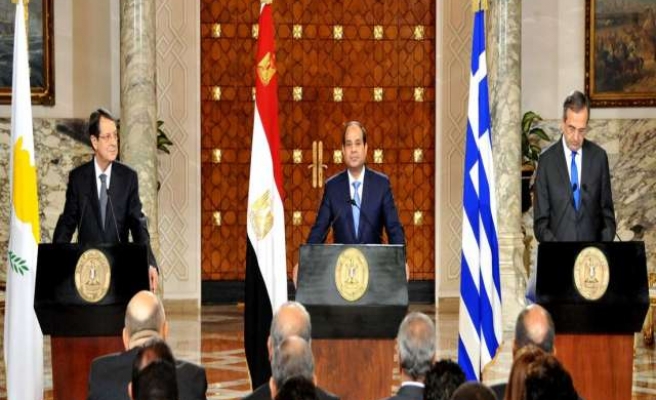 Egypt, facing its worst power crisis in decades, on Saturday pledged greater energy cooperation with Greece and Greek Cyprus, a diplomatic move that opened up the possibility of progress in talks to import natural gas from Cyprus.

Greek Cypriot President Nicos Anastasiades said in Cairo that the three countries "discussed boosting cooperation in the field of energy, with the belief that the discovery of hydrocarbons in the eastern Mediterranean can contribute to supporting regional cooperation for stability and prosperity."

The meeting in Cairo between Anastasiades, Egyptian President Abdelfattah al-Sisi and Greek Prime Minister Antonis Samaras demonstrated deepening ties between the three states, who are challenging Turkey's efforts to chart gas deposits in areas of the east Mediterrean claimed by Greek Cyprus.

Egypt badly needs natural gas imports. It has been unable to clinch attractive import deals with allies like Russia and Algeria at least partly because it lacks re-gasification technology needed to import liquefied natural gas (LNG).

No details about BG Egypt's talks with Cyprus Hydrocarbons (CHC) were announced by the leaders at a joint news conference.

But the leaders said they would work to strengthen cooperation on a number of issues, including a solution to Cyprus' decades-old partition along the ethnic lines of its Greek and Turkish Cypriot populations.

That split has implications for gas reserves that Greek Cyprus, a European Union member, is keen to develop to the south of the Mediterranean island.

Turkey does not recognise Cyprus, and has reportedly dispatched a ship to collect seismic data in the disputed waters -- a precursor for possible gas exploration.

The Cairo meeting came a day after Greece urged Turkey to stop harassing Greek Cyprus while it looks to exploit offshore natural gas fields, wading into the island's dispute.

The three officials also called on other countries to join hands in the fight against the "existential threat of terrorism".

The three officials expressed deep concern over the situation in Libya, which has been in turmoil since the ouster and subsequent killing of strongman Muammar Gaddafi in 2011.

They also said that they would take suitable measures to support calls for an immediate cessation of violence in Libya and holding political dialogue for achieving reconciliation in the country.

The three officials also agreed to "urgently" resume their negotiations on defining their maritime boundaries and underlined the importance of respecting the "sovereignty of Cyprus over its own economic zone."

They went on to call on Turkey to stop its current seismic survey "within the maritime boundaries of Cyprus" and to refrain from carrying out similar activities in the future.

The three top officials also called for bringing about a just, comprehensive and lasting settlement to the "Cypriot problem" with a view to unifying the island in line with international law.

Al-Sisi said his country would seek to fully exploit agreements it previously signed with Greece and the Greek Cypriot Administration in all fields.

"This derives from our respect for the rules of international law and the principles and objectives of the United Nations Charter, particularly when it comes to the sovereignty of countries, the need not to violate their borders or interfere in their internal affairs," al-Sisi said.

Anastasiades, meanwhile, said his talks with the Egyptian and Greek leaders focused on internal developments in Egypt as well as what he described as "violations committed by Turkey" in the Greek Cypriot Administration.

He went on to say that the Turkish "violations" impeded the negotiation process in the area.