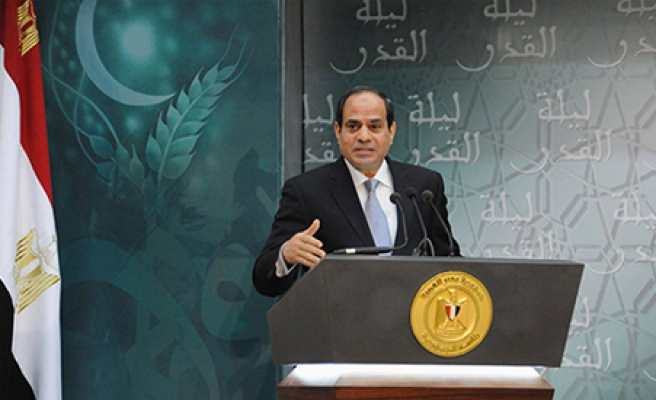 Egypt's post-coup president Abdal-Fattah al-Sisi has demaned that the Organization of Islamic Cooperation (OIC) remove the term 'Turkish Cypriot State' in reference to the unrecognized Turkish Republic of Northern Cyprus (TRNC), which has observer status within the organization.

Speaking at an OIC meeting in New York, al-Sisi insisted that any reference to the “Turkish Republic of Northern Cyprus or Turkish Cypriot State” was unacceptable and was ultimately the reason for not adopting any resolutions or conclusions.

His comments were supported by the United Arab Emirates and Iran, who along with Egypt were thanked by the Greek Cypriot Foreign Minister Ioannis Kasoulides for expressing their opposition to what the Greek Cypriot administration deems to be an illegal occupation of the northern half of the island.

However, Turkey and the Turkish Republic of Northern Cyprus wasted no time in rebuffing his argument, as Turkey's representative to the UN Yasar Halit Cevik said: “Any nation that has a problem with Turkey should resolve it with Turkey. An attack on the Turkish Cypriot people is not acceptable.“

TRNC Foreign Minister Ozdil Nami, who was also at the meeting, said that the observer status of the Turkish Cypriot state was an issue agreed upon by participating nations and only a joint decision made by those nations could change that.

The Foreign Minister of the breakaway state, which declared independence in 1983 after nine years of failed peace talks to reunite the island following a military intervention by Turkey in 1974 in response to a Greek-inspired coup on the island, also slammed Egypt's attitude as unethical and disrespectful.

Egyptian president al-Sisi, who was elected in a largely boycotted election in May almost a year after he led a military coup on the elected president Mohamed Morsi in July 2013, is due to visit the Greek Cypriot-controlled southern Cyprus to discuss a hydrocarbon deal.

Turkey, the most outspoken nation against the Egyptian coup, has been on the receiving end of criticism from the new Egyptian regime, who accuse the Turkish government of supporting the Muslim Brotherhood movement from which Morsi hailed.

The Muslim Brotherhood was listed as a terrorist organization by Egypt after the coup, seeing its assets frozen and its leaders and hundreds of supporters arrested.

Since the coup, relations between Turkey and Egypt have been strained, with Turkish president Recep Tayyip Erdogan calling on the international community to bring the new regime to justice at the UN General Assembly in New York in September.