In a joint statement, Greece and the Greek Cypriot administration agreed to provide political support to Egypt. 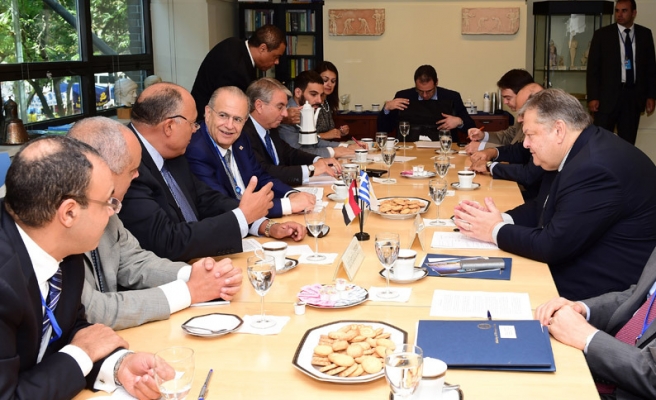 Greece, Egypt and the Greek Cypriot administration have decided to improve their ties after a trilateral meeting between their foreign ministers in New York on Sunday.

In a joint statement, Greece and the Greek Cypriot administration agreed to provide political support to Egypt, which is recoving a year on from a military coup that ousted elected president Mohamed Morsi led by the current president Abdal-Fattah al-Sisi.

The statement reaffirmed its solidarity with the Egyptian government and its people's quest for a prosperous and democratic country.

Regarding the energy field in particular, the three nations said that the Eastern Mediterranean could become a pillar of stability in the wider area by promoting cooperation among neighboring countries.

During the visit, a 2003 Agreement for the Delineation of the Exclusive Economic Zone was signed between the two governments.

This was followed up earlier in September when Egypt and the Greek Cypriot administration moved closer to a deal on the development of hydrocarbon resources once a signed ratification from the Egyptian authorities comes through.

An Egyptian Presidential Decree ratified the framework agreement between the two governments regarding the development of hydrocarbon resources that stretch from one side of the Median Line to the other.

Last November, a report published by the Middle-East monitor suggested that the Greek Cypriot government is still in the process of exploring its own reserves and is negotiating a deal with Israel to supply the island with gas while exploration works continue. This means any deal between Egypt and Greek Cyprus would, at least in the short-term, be over Israeli reserves.