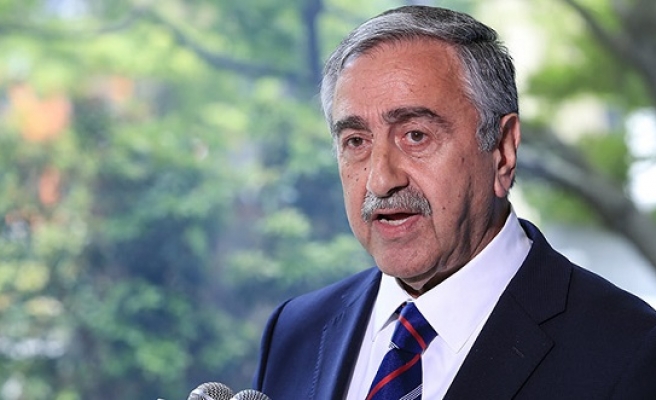 The Greek Cypriot administration has not given positive response to the framework presented by the UN chief Antonio Guterres during Cyprus Conference in the Swiss Alps back in June 2017, Turkish Cypriot president said on Thursday.

In a statement, Mustafa Akinci said: "Rather than giving a positive response to my genuine call on the matter [Guterres framework], the Greek Cypriot side have chosen to speak of a nonexistent document dated July 4 for the past two days.

“Unfortunately, this stance shows that they will continue to divert and distort the Guterres Framework and unfortunately this is not an approach that would aid resolution."

The Guterres Framework is a one-page document which included five major topics such as territory, political equality, property, equivalent treatment and security and guarantees.

The Greek Cypriot leader Nicos Anastasiades claims that a change to the original framework was suggested by himself on July 4.

However, such amendment does not exist and is not accepted by the Turkish Republic of Northern Cyprus or the UN.

Underscoring that the Guterres Framework is a document presented to both sides on June 30, 2017, Akinci said: "This document, which the UN has given to the sides and does not have another version and was confirmed by the UN Secretary General Guterres in New York on September 23, 2017."

Akinci stressed that the aim of Greek Cypriot side is only to occupy both the nations by levelling allegations.

"I could not remain silent as a long-lasting period of recession and tension is rapidly proceeding, and a permanent division on our island is becoming a greater possibility. I'd like to once again recall that this is an effort to fulfill a historic responsibility," he added.

He further asserted that the Turkish Cypriot side will not be a part of an open-ended and non-result-oriented process.