According to an official press release, the Greek Cypriot Foreign Ministry denounced Erdogan`s visit as 'illegal.' 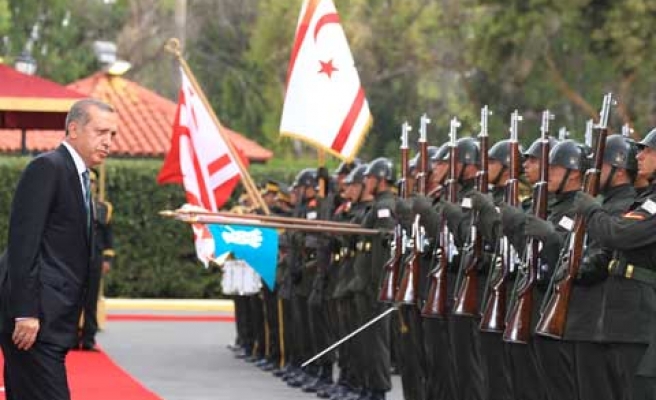 The Greek Cypriot administration has launched a complaint with the United Nations about Turkish President Recep Tayyip Erdogan's recent visit to the Turkish Republic of Northern Cyprus (TRNC).

According to an official press release, the Greek Cypriot Foreign Ministry denounced Erdogan`s visit as 'illegal' and said that it had brought up the issue with the UN via its the representative, Nicos Emiliou, in New York.

Emiliou sent a letter of complaint to the UN Secretary General Ban Ki Moon and American Permanent Representative Samantha Power, who currently holds the presidency of the UN Security Council.

Greek Cypriot daily Famagusta Gazette reported that the complaint also referred to comments made by Erdogan during his visit to what they deem to be 'illegally occupied' territory as counter-productive to ongoing peace talks on the island between Greek Cypriots and Turkish Cypriots.

Erdogan also warned that “the current window of opportunity will not remain open forever,” and slammed co-guarantor state Greece for not playing enough of a role in finding a solution to the Cyprus problem, saying “the Cyprus problem will be solved very quickly if Greece does its duty as a guarantor power as Turkey has done.”

Regarding Erdogan's comments during his first official overseas visit as Turkey's newly elected president on September 1, the Greek Cypriot administration said “they undermine the climate, degrade any sense of confidence and vanish hopes and prospects for progress in talks on the Cyprus problem."

The letter also called Erdogan's comments a contradiction to Turkey's pursuit to become a non-permanent member of the Security Council.

The last time the two sides came close to a deal was in 2004 when a deal put forward by former United Nations Secretary General Kofi Annan to reunify the Turkish Cypriot and Greek Cypriot communities was defeated by a "no" vote in a referendum held in the Greek Cypriot administration. The Turkish Cypriots had voted in favor of the Annan plan.

The island was partitioned into Turkish and Greek zones in 1974 after Turkey's military intervention on July 20 as the right-wing Greek military junta tried to annex the island to Greece. Currently, Turkey maintains 35,000 troops in the TRNC.