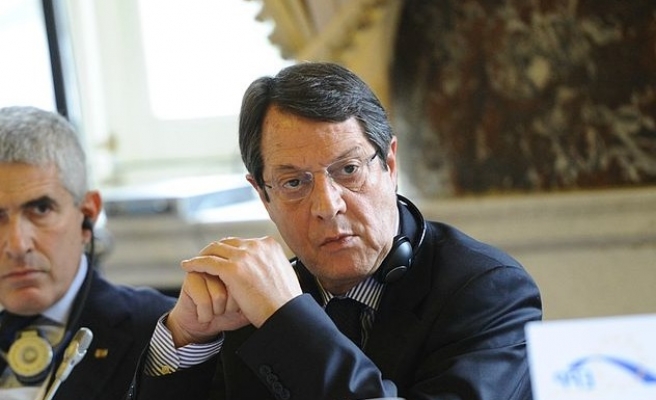 The Greek Cypriot administration has withdrawn from peace talks with the Turkish Cypriots after Turkey sent a warship to monitor gas exploration in the region.

Anastasiades reportedly made the decision after consulting with Greek Cypriot party leaders.

As a result, the planned Thursday meeting between Anastasiades and Turkish Republic of Northern Cyprus (TRNC) president Dervis Eroglu has been cancelled.

The announcement comes after Greece's Deputy Prime Minister and Foreign Minister Evangelos Venizelos had an extensive telephone conversation with Greek Cypriot Foreign Minister Ioannis Kasoulides regarding the next steps in response to the situation.

In response, the Turkish navy sent its Bafra Korveti warship to observe the drillship's activities before announcing it too would search for oil and gas off the island's south coast.

Previously, US-firm Noble Energy found an estimated 5 trillion cubic metres cubic meters of gas off the south-eastern coast in late 2011. France's Total has also signed a concession to drill for gas with Cyprus.

This development will prove to be the first major test for the United Nations Secretary General`s new Special Adviser on Cyprus, Espen Barth Eide, who will be in Cyprus on later today.

Turkey has been closely monitoring the exploration of oil and gas fields being carried out by the Greek Cypriot administration, the Turkish General Staff announced on Monday.

In a statement, Turkey’s military leaders said security forces had been watching the Bahamas-flagged SAIPEM-10000 drillship as it explores for oil and gas off the southern coast of Cyprus.

Earlier, Turkey warned the administration against unilateral moves to extract natural gas and oil without considering Turkish Cypriot claims to the reserves.

Greek Cypriots' hydrocarbon exploration activities are not commiserate with the peace process, the Ministry of Foreign Affairs of the TRNC said on their website statement Friday.

The ministry drew attention to the joint statement signed by both parties in February as part of the peace process and urged the Greek Cypriots to fulfill their part towards a resolution.

The discovery of natural gas reserves in the eastern Mediterranean's Levant sea basin, which is found within Cypriot waters, is considered to be a possible alternative to Russian gas.

However, a 40-year political dispute between the island's Turkish Cypriots and Greek Cypriots are proving to be an obstacle to the shipment of the newfound resource.

Although Europe is arguably the favorite to become the island's number one customer for the gas, Turkey insists that the only way it would allow pipelines through its territory to supply Europe is if the Greek Cypriot administration agrees to the UN-backed bi-zonal, bi-communual peace deal with the breakaway Turkish Republic of Northern Cyprus (TRNC).

Reluctance on the Greek Cypriot side to agree to a bi-zonal federation has led them to consider other possibilities, including pipelines through Greece, which many experts consider unrealistic.

Israel has considered plans to begin building an LNG plant in Cyprus in 2016 in order to allow Israel to supply the Asian demand for a cheap price. However, in order to compete with Australia, Mozambique, the US, Canada and Russia, who have already offered to supply the far-east with LNG by 2018-2020, Israel needs to act quickly and therefore cannot afford to wait for the Greek Cypriot administration to complete this project.

The Cyprus peace talks were revived in February after they broke off in 2012 when the Greek Cypriot administration took over the EU presidency, despite Turkey's protests. Turkey was also displeased that the Greek Cypriot administration was signing deals with neighboring countries over the gas reserves while the island of Cyprus remained divided due to an unresolved dispute.

Turkey had argued that Greek Cypriot exploitation of gas reserves in the Levant basin while the Cyprus issue remained unresolved would deny Turkish Cypriots their rights to benefit from the reserves. Turkey therefore began its own exploration project in Turkish Cypriot waters off the coast of Karpaz (Karpassia), which the Greek Cypriot administration argues is illegal.