The resignations came a day after the Greek Cypriot parliament voted down a plan for the privatization of state assets - one of several conditions attached to the country's international bailout. 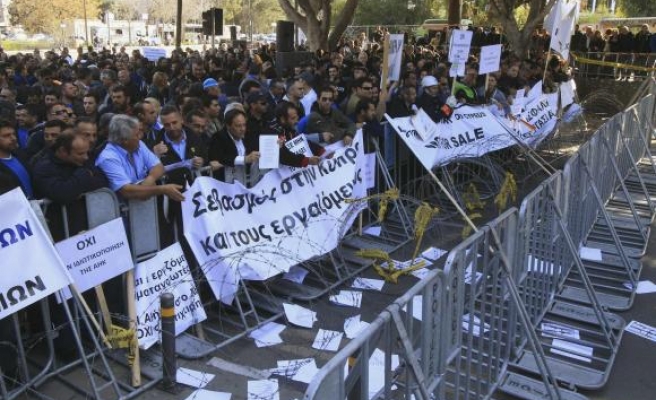 Four members of the Council of Ministers of the Greek Cypriot administration resigned on Friday, a day after the coalition partner Democratic Party (DIKO) quit the coalition in disagreement over the terms of the resumed peace talks between Greek and Turkish Cypriot sides on the divided island.

After the extraordinary meeting of the Council of Ministers on Friday, four ministers from DIKO tendered their resignations to President Nikos Anastasiades.

Spokesperson for the Cypriot government, Christos Stilianidis said in a statement that all ministers of the government led by President Nikos Anastasiades resigned and he confirmed that the President asked the ministers to remain in their posts until he announced the upcoming reshuffle on March 15 at the latest.

The resignations came a day after the Greek Cypriot parliament voted down a plan for the privatization of state assets - one of several conditions attached to the country's international bailout.

The Greek Cypriot parliament has 56 seats, 8 from the Democratic Party (DIKO), 20 from Anastasiades' center-right Democratic Rally (DISY) Party, 19 from the Progressive Party of Working People (AKEL), 5 from the Movement of Social Democrats (EDEK), 1 each from the European Party (EVREKO) and Cyprus Green Party and two independent.

As part of the resumed talks, the first such visits since the division of the island in 1974, two separate delegations of Turkish and Greek Cypriot negotiators visited the Greek capital of Athens and Ankara, Turkey's capital city, Thursday as part of efforts to unify the island 40 years after its division.

The Cyprus island is split in two since 1974, when Turkish military intervened in the island following a coup against Cypriot President Archbishop Makarios III by forces that were demanding the union of Cyprus with Greece.

In the last few decades, Turkish Cypriots and Greek Cypriots, with the mediation of international players, have attempted to find a solution for the unification of the country.