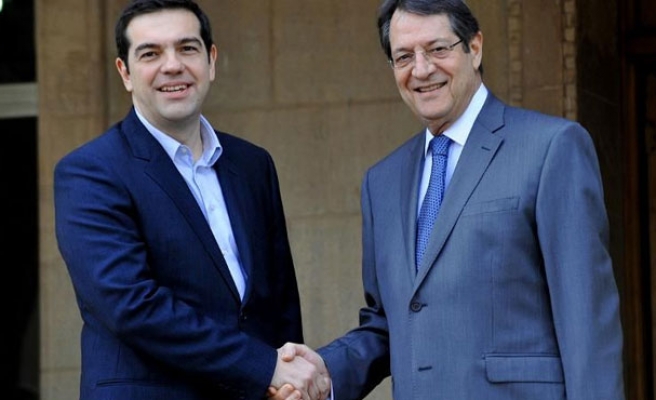 New Greek Prime Minister Alexis Tsipras has declared the issue of divided Cyprus is a key priority for his government, as he made his first official visit to the island.

Speaking at a press conference on Monday in Nicosia, southern Cyprus, after holding talks with President Nicos Anastasiades, Tsipras underlined the close ties between the two countries.

He said: "Cyprus - the ongoing issue - is in the Greek government’s mind and heart."

"It is no coincidence that I chose the first official trip as Prime Minister to be held in Cyprus. We have ties of a common glorious history, but also a hopeful future."

"We will vigorously support the efforts of the Republic for a just and viable solution to the Cyprus problem," he added.

Asked if the Greek government would proceed with the delimitation of the Exclusive Economic Zone with the Republic of Cyprus, and the right of the Muslims of Thrace to elect a mufti or the creation of a mosque in Athens, Tsipras replied his new government had to be careful with its first steps.

"We have a new government focused on radical change, but no government will take any steps without being able to study them," he said.

Tsipras sent a message to the EU, saying Greece and Cyprus were a pillar of stability in the region and that fact must be understood by those in Europe who thought only in terms of economy.

He said it was "mature and necessary" to have discussions with the Troika - comprised of the IMF, European Central Bank and the European Commission - which would prove a positive step for Europe.

The Cyrpus dispute goes back to 1960, when a Treaty of Guarantee was signed between the Turkish and Greek Cypriots, along with the British government, over the island.

The treaty banned the island of Cyprus from participating in any political or economic union with any other state, as well as making other parties guarantee its independence, territorial integrity and security.

However, in 1963, only three years after the treaty was signed, Turkish Cypriots were ousted by force from all organs of the new republic by their Greek-Cypriot partners, which violated the founding agreements and the Constitution.

The Greek Cypriots, thereafter, claimed to represent the Republic of Cyprus, which was considered illegal and not recognized by Turkey.

Between 1964 and 1974, the international community made several peacemaking efforts that all ended in failure.

In 1974, an attempt by Greece to annex the island through a coup was made, which was resisted by a Turkish peace mission in accordance with the 1960 treaty.

Consequently, the Turkish Cypriots set up their own republic in 1983, while continuing the search for reconciliation.

While the European Union recognizes the Greek-Cypriot administration in the island, Turkey recognizes the Turkish Republic of North Cyprus diplomatically.

The negotiations between the Turkish and Greek Cypriots resumed after a two-year pause in February 2013.

The previous round of talks had collapsed amid of the Eurozone debt crisis as the Greek Cypriot side took its turn to occupy the EU presidency in 2012.

However, the Greek-Cypriot administration suspended the talks over the divided island on Oct. 7, 2014 after Turkey sent a ship to monitor an oil-and-gas exploration mission off the coast of Cyprus.