Tuesday's meeting was the first meeting between President Eroglu and the OIC chief since Madani took over from former head Ekmeleddin Ihsanoglu. 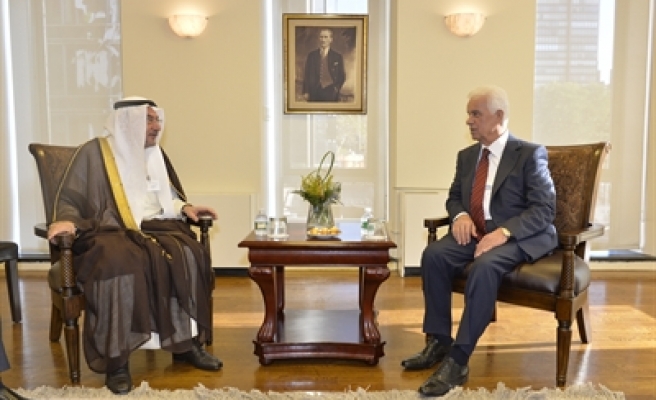 Turkish Republic of Northern Cyprus (TRNC) President Dervis Eroglu met with the Secretary of the Organisation of Islamic Cooperation (OIC) Iyad Bin Amin Madani during his visit to New York.

President Eroglu, who is in New York for series of meetings within the framework of the UN General Assembly including a meeting with UN Secretary Ban Ki Moon, arrived in New York on Monday night along with negotiator Kudret Ozersay, where they were greeted by TRNC representative Mehmet Dana.

Tuesday's meeting was the first meeting between President Eroglu and the OIC chief since Madani took over from former head Ekmeleddin Ihsanoglu.

After the meeting, Madani vowed to increase cooperation between the TRNC and the OIC, especially in the feilds of education, science and technology, adding that a meeting between OIC representatives and the TRNC's Education and Tourism Ministers have been planned.

Madani also said the OIC will be closely involved in the political coordination of the TRNC, promising to do all it can to support the TRNC in its cause.

The TRNC, recognized only by Turkey, declared independence from the Republic of Cyprus in 1983 after nine years of failed negotiations to restore the Cyprus constitution which was compromised by a coup on the government by the Greek junta in July 1974 in an attempt to unite the island with Greece.

The coup prompted Turkey to use its guarantor powers and intervene. Four decades of peace negotiations have failed to forge an agreement between Turkish Cypriots and Greek Cypriots, which would see the withdrawal of Turkish troops from the island.

The latest notable attempt was in 2004, when the island's two peoples went to referendum to vote on whether or not the island should be reunited ahead of its accession to the EU.

Although the vast majority of Turkish Cypriots, who have been on the receiving end of international embargoes since 1974, voted for reunification, the Greek Cypriots voted against it.

UN-supported negotiations to reunite the island as a bi-zonal, bi-communual federation are ongoing after peace talks were revived in February following a two-year pause.

President Eroglu is also due to meet UN Secretary General Ban Ki-moon on the 27th September.