In their joint statement, the clerics said they expect political leaders to achieve a solution and support the initiatives taken so far. 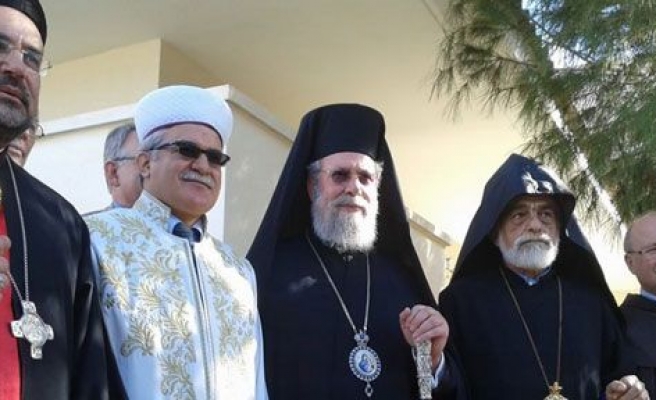 The religious leaders of Cyprus have voiced support for the recently re-launched peace negotiations in the long-divided Mediterranean island, on Wednesday in South Lefkosa.

The Archbishop Chrysostomos of the Eastern Orthodox church expressed his hope over Turkey's positive role in the negotiations.

The Cyprus peace talks, which have been stalled since January 2012, are set to resume after the Turkish and Greek Cypriot leaders agreed on a joint declaration more than a fortnight ago.

The Swedish ambassador to Greek Cyprus, Klas Gierow, hosted the meeting in the embassy’s residence where head of Turkish Cyprus religious affairs, Talip Atalay, met the Christian clerics and the head of U.N. peacekeeping force in Cyprus, Lisa Buttenheim.

The Turkish Republic of Northern Cyprus (TRNC)’s religious affairs chairman said that the clerics should have a common language, apart from a political one, where everyone can find a reflection of himself or herself to serve the peace talks.

In their joint statement, the clerics said they expect political leaders to achieve a solution and support the initiatives taken so far.

"The Christians and Muslims have been living, working and worshipping side-by-side for centuries," said the statement. "The religion has suffered from the conflict that has been going on for a long time".

Cyprus has been divided into Greek and Turkish sides since a Greek Cypriot coup in 1963 was followed by an intervention by Turkey in 1974.

Turkish Cypriots accepted a 2004 deal put forward by the U.N. to reunify the two communities of island, but the reunification plan was defeated when Greek Cypriots voted 'no' in a referendum. Intermittent talks had since been inconclusive due to political and economic reasons, until early this month.

A joint declaration announced by the U.N. mission in Cyprus on Feb. 11 said a settlement between the two sides “will be based on a bi-communal, bi-zonal federation with political equality."

The Greek Cypriot administration's negotiator, Andreas Mavroyannis, has arrived in Ankara on Wednesday to hold talks with Foreign Ministry Undersecretary, Feridun Sinirlioglu as part of the efforts to find a solution to decades-long dispute over the divided island of Cyprus.

Kudret Ozersay, the negotiator from the Turkish Republic of Northern Cyprus (TRNC), is to simultaneously meet Greek Foreign Ministry Secretary General Anastassis Mitsialis, in the Greek capital of Athens.

After almost a two-year-long pause, Turkish Cypriot and Greek Cypriot leaders held their first meeting last week, issuing a joint declaration that outlines the way forward for a solution to the crisis that has gripped the island for half a century.

The Greek Cypriot administration is a member of the European Union (EU) and recognized internationally, except by Turkey who only recognizes the Turkish Republic of Northern Cyprus (TRNC).