On Friday, Greek Cypriot Environment and Energy Minister Yanis Maniatis was quoted in the local press indicating that research on the feasibility of an 'Eastern Mediterranean Pipeline' from Cyprus to Greece would soon commence. 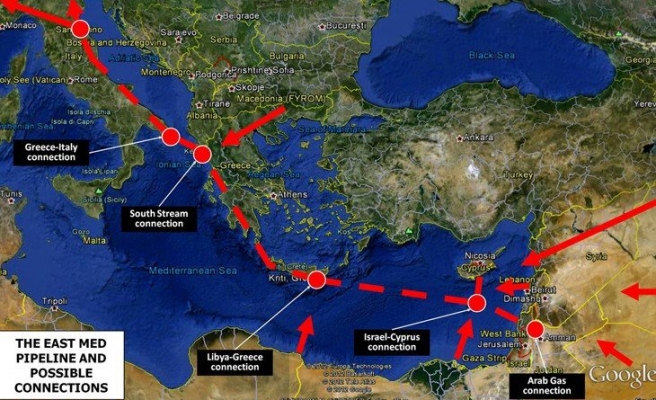 Turkish Cypriot negotiator Kudret Ozersay has said that Greece's desire to pump natural gas in the eastern Mediterranean to Europe via Crete is nothing but a 'dream'.

Ever since falling out with Russia over the troubles in Ukraine, Europe has been considering alternative reserves for its natural gas supply. At the same time, the discovery of natural gas off the shores of the island of Cyprus has revived otherwise stalled peace talks between Turkish Cypriots and Greek Cypriots.

Turkey, which has maintained a military force in the north of the island for 40 years since a coup on the 1960 Cyprus convention-backed government by EOKA rebels seeking to unite the island with Greece left Turkish Cypriots in danger, is encouraging the talks in the hope that the pipelines will enter Europe through Turkey.

However, Greece, which is hoping not to be left out of the regional agreements regarding the natural gas reserves in the Levant basin, also hopes that pipelines entering Europe through Crete will help revive their struggling economy.

On Friday, Greek Cypriot Environment and Energy Minister Yanis Maniatis was quoted in the local press indicating that research on the feasibility of an 'Eastern Mediterranean Pipeline' from Cyprus to Greece would soon commence.

Kudret Ozersay, on the other hand, ruled out this possibility, saying that such a project would be almost impossible.

“I do not believe this is an alternative,” Ozersay told Kibris newspaper on Monday, adding that such a pipeline would be expensive and risky as the it would have to pass through deep waters.

“Experts say that this project is nothing but a dream,” he added.

Ongoing peace talks surrounding the natural gas reserves hope to unite the divided island of Cyprus, with a political solution between the island's Turkish Cypriots and Greek Cypriots seen as vital before exports can commence.

The decrease of Ukraine's significance as an energy hub has added importance to Turkey's role in the region, with a number of oil and gas pipeline projects in cooperation with Cyprus, northern Iraq, Azerbaijan and Turkmenistan promising to provide Europe was a suitable alternative to Russian gas.